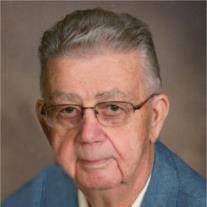 Kenneth Gene Erlandson, 81, Mandan, passed away on Wednesday, June 15, 2016 at his home of cancer.
A Funeral Service will be held at 9:30 am on Tuesday, June 21, 2016 at Messiah Lutheran Church, Mandan, with Rev. Matt Thompson presiding. Burial will follow at the North Dakota Veterans Cemetery with full military honors.
Visitation will be held from 4 to 8 pm on Monday, June 20, 2016 at Buehler-Larson Funeral Home, Mandan, with a Prayer Service at 7 pm. Visitation will continue one hour prior to service at the church on Tuesday.
Kenneth was born August 8, 1934 to Emil and Clara (Bekkerus) Erlandson in Grafton, ND. He grew up in Grafton and graduated from there in 1953. Upon graduation, Ken enlisted in the US Navy in 1953 and was honorably discharged after four years of service. Kenneth then went on to Molher Barber School in Fargo, ND and completed his apprenticeship at Gerhing’s Barber Shop in Mandan and finished his Masters in 1961. Kenneth and Gene Becker opened Silver Clipper Barber Shop and the two were partners for over 42 years until retirement.
On June 5, 1959 Kenneth married his love, Patricia Jangula. They made their home in Mandan and raised their three children.
“Kenny the Fisherman” was the nickname he earned through his love of being on the water. He also enjoyed watching many sports, especially the Minnesota Vikings and the Minnesota Twins. Cooking for his family was a great joy to him. Some of his most precious times were spent with his grandchildren and great grandchildren.
Kenneth is survived by his wife of 57 years, Patricia, Mandan; sons, Robert (Kimberly) Erlandson, Bismarck and Keith Erlandson, Mandan; his daughter, Doris (Bob) Linderman, Gillette, WY; a sister, Agnes Heuchert, St. Thomas, ND; and a brother, Gerald Dey, Lacey, WA. He is also survived by nine grandchildren and 15 great-grandchildren.
Kenneth was preceded in death by his parents and two sisters, Esther and Hilda.
Memorials are preferred to Messiah Lutheran Church of Mandan or The American Cancer Society.
To order memorial trees or send flowers to the family in memory of Kenneth Erlandson, please visit our flower store.