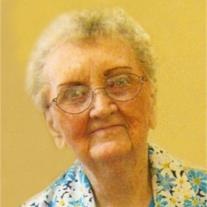 A funeral service will be held at 1 pm on Monday, March 28, 2016 at Peace Church, New Salem, with Reverend Joshua Eddy officiating. Burial will be at Peace Cemetery.

Visitation will be held one hour prior to the service at the church on Monday.

Josephine was born August 15, 1926 in Froid, MT to Perry and Candace (Ridell) Huff. She graduated from Froid High School in 1944. On November 11, 1944 she married William H. Olson. They shared 24 years together and had 7 children. William died in December 1968. In November 1970 Jo married Edward Nagel and they shared 31 years together before he passed in October 2001. Jo worked as a janitor at the grade school, a housekeeper at Elm Crest Manor and owned Longhorn Bar.

Jo was an avid reader and liked to make quilts and sew. Always time for a card game, she liked smear, pinochle, rummy 14, and also liked to play cribbage and Scrabble. Talented in the kitchen, Jo was a wonderful baker. She enjoyed watching TV, especially Law & Order and bull riding and listening to country western music. She enjoyed her travels to Montana, Idaho, Washington, California, Minnesota, South Dakota, and Nevada to visit family and friends. Jo loved flowers and always had beautiful flower gardens. In her earlier years she visited shut ins at Elm Crest Manor, attended bible study, taught Sunday school, and was a member of the Pioneer Club. Jo faithfully attended Peace Church and helped with church functions, guild meetings, and funeral serving. Jo looked forward to the bus rides she took to Bismarck several times a month for appointments and shopping.

Jo was preceded in death by her parents; two husbands; two sisters, Joyce Oliver and Dorothy Ochs; and one grandson, Chad Olson.
To order memorial trees or send flowers to the family in memory of Josephine Nagel, please visit our flower store.