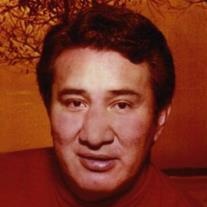 Joseph Louis (Joe Louie) Ironroad, Tasunka Ahomni U (His Horse Comes Around To Him) entered into the spirit world on Thursday, August 27, 2015 surrounded by his loving family, at the age of 70. Joseph had been receiving treatment for his illness at Sanford Health, in Bismarck, ND until his untimely passing.

A funeral service will be held at 10 am on Friday, September 4, 2015 at the Solen School Gym. Burial will be at 1 pm at the ND Veterans Cemetery with full military honors.

Visitation will be held from 5 to 8 pm on Thursday, September 3, 2015 at the Solen School Gym.

Joseph was born April 7, 1945 at home near Solen, ND on the Standing Rock Sioux Indian Reservation to John and Julia (Four Swords) Ironroad. He attended school at Solen Elementary and High School, graduating in 1964. Right after high school, he enlisted in the Army, serving his country from 1964 until he was honorably discharged in 1970. During his service in San Francisco, CA, where he met the love of his life, Barbara J. Wilcox, while he worked as a warehouseman. On June 8th, 1974 they were married in Reno, NV. Together they had two wonderful sons, John and Steven Ironroad.

Joseph cared so much for all children. He mentored and helped anyone who was in need. He had many friends and family that he cherished spending time with, most of all, his granddaughter Madison, whom he lovingly called his girl. He was a Hero to his brother/sister-in-laws and to all who knew him.

Joseph had many interests in his life that included cheering for his favorite sporting teams the San Francisco 49ers, New England Patriots, New York Yankees, and Duke Blue Devils. He also loved rodeos, watching Nascar racing, playing poker, going to the casino, and spending time with his many beloved pets. He loved all animals.