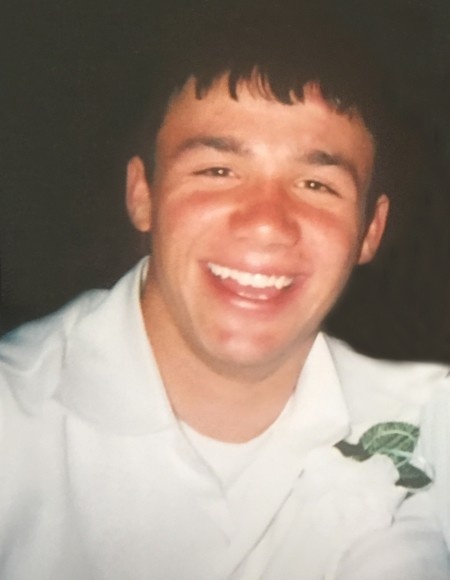 A memorial service will be held at 11 AM on Saturday, February 15, 2020 at the Mandan Eagles Club with Rev. Gene Anderson officiating.  Family will greet friends one hour prior to the service at the Eagles Club.

John was born May 8, 1983 to John Sr. and Sandy (Anhorn) Prudente in Bismarck.  He grew up in Mandan attending Mandan High School.  When Ernie was younger, he was always out riding BMX bike around Mandan, which some will remember him for as well as his famous greeting of a middle finger.  He also took part in four-wheeler races during the monster truck rally at the Civic Center and played hockey.  Ernie enjoyed playing in the water and watering everything outside.  His dad would always have to buy two sets of tools because Ernie would take his first set as his own.  His attention to detail was so great that when detailing cars, he would go through things with a fine-toothed comb and even used toothbrushes to clean!  His prized possession was his Ford Bronco and it meant a lot to him.  Ernie would not let anyone else drive that vehicle, especially his sister, whom he is still sending signs to stay away from his Bronco.  He enjoyed collecting numerous different trinkets, many of which he got from his sister’s house and somehow tying them all together.  The smallest gifts he received from his mom, Sandy, would bring him so much joy. Ernie was always on the lookout for more trinkets to add to his collection.  He also had a collection of over 4,000 hot wheels cars.  Ernie always had a special bond and love for his dogs.

Ernie was preceded in death by his grandparents, Mike and Edna Prudente and Ray and Mildred Anhorn; godparents, Bob and Ruth Senn; and his dogs, Party and JR.

To order memorial trees or send flowers to the family in memory of John "Ernie" Prudente Jr., please visit our flower store.
Open