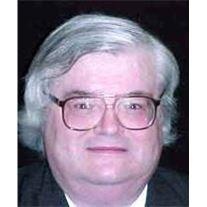 John Joseph Gosbee, 64, Selfridge, N.D., died at 9 a.m. on June 16, 2014, at the Sanford Health Continuing Care Center on Sunset in Mandan, N.D. He had been suffering from cancer of the liver and spine.
A memorial service has been scheduled for 11:30 a.m. Friday, June 27, 2014, at the Continuing Care Center’s chapel.
John Joseph, the son of John Francis and Gloria Evelyn (Fuller) Gosbee, was born Aug. 10, 1949, in Beverly, Mass., on the Massachusetts north shore about 25 miles north of Boston. John grew up in nearby Danvers, Mass., and graduated from Danvers High School in 1967. John earned a bachelor’s degree in economics at Brandeis University in Waltham, Mass., in 1971, and graduated from St. Mary’s University School of Law in San Antonio, Texas, in 1977. He took a master of laws degree in taxation from the Boston University School of Law in 1981.
John moved to North Dakota in March 1982 to take a job at the Legislative Council, the research agency of the North Dakota Legislature. He served as a staff attorney on the council, a job that involved drafting proposed laws and giving legal advice to lawmakers. His work appeared in every volume of the North Dakota Century Code. John left the Legislative Council in October 1987 and later established a private law practice in downtown Mandan, N.D. He bought a home in rural Morton County, which he chose in part because the property was in the Mountain time zone at the time. John was fascinated by the idea of living in one time zone and driving to work in another. During Christmas time, John would take a short drive from his home in Selfridge to McIntosh, S.D., across the border of the Mountain time zone, so that he could have a “25-hour Christmas.” In his law practice, John specialized in defending people who were being hounded by bill collectors. He was an expert on the Fair Debt Collection Practices Act, a federal law that spells out debtors’ rights and what creditors may or may not do in attempting to collect bills. On his law office website, John declared: “Are bill collectors making your life miserable? We can stop the annoying phone calls cold.” After leaving the Legislative Council, John became involved in Republican politics. He was endorsed in 1988 to be the GOP candidate for attorney general against the incumbent Democrat, Nicholas Spaeth. John campaigned hard, but lost. He got 27 percent of the vote. He took his shellacking with his characteristic good humor, declaring: “The people have spoken, the bastards.”
John never ran for a partisan office again, although he did apply unsuccessfully for judgeship appointments and ran unsuccessfully for a North Dakota district judgeship. John was best known for his advocacy of various initiative and referendum campaigns. He helped lead a campaign for voter repeal of North Dakota’s first compulsory seat-belt law in 1989. When the Legislature approved another version of the same law in 1993, John again circulated repeal petitions, but voters narrowly endorsed the new law in a June 1994 statewide election. John then launched an initiative campaign to repeal the law, but in the November 1994 election, North Dakotans voted to keep it. It is largely the same compulsory seat-belt law that North Dakota has today. John liked to sing a ditty related to the law: “Buckle up, buckle up, don’t get caught, breaking our governor’s seat-belt law.” John also worked on campaigns to limit the terms of public officials and overturn the Legislature’s decision to make the birthday of civil rights leader Martin Luther King Jr. into a state holiday. John told friends that at his funeral, he wanted any and all petition circulators to be welcomed. John moved to Fort Yates and then to Selfridge when he began work as the Sioux County state’s attorney. He was appointed in September 2007 after the death of the incumbent, Maury Thompson. John was elected in 2008 to serve out Thompson’s unexpired term, and re-elected in 2010 to a four-year term.
At the time of his death, John was running for his second four-year term. Despite his illness, he managed to collect enough signatures to appear on the June primary ballot, where he was unopposed. John was grateful to Todd Schwarz, the state’s attorney in neighboring Grant County, for helping him meet his obligations as Sioux County state’s attorney when he was ill. He was also grateful for the support of the Sioux County courthouse employees, the commissioners and Sioux County Sheriff Frank Landeis. John founded the North Dakota chapter of Mensa, an organization of people who have scored in the upper 2 percent of the population on a recognized intelligence test. A few weeks before his death, members presented him with a plaque to honor his service. When John read obituaries in The Bismarck Tribune, he was struck by how many of the people who had passed on were praised for their skill in making caramel rolls. John said he wanted it to be included in his own obituary that he never made caramel rolls or even attempted to do so.
John is survived by his sister and brother-in-law, Adrienne and Joseph Schier, of Melbourne, Fla. He was preceded in death by his parents and his sister, Josette Marie Gosbee, who died July 13, 2012.
To order memorial trees or send flowers to the family in memory of John Gosbee, please visit our flower store.