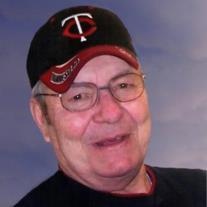 A funeral service will be held at 10:30 am on Tuesday, February 17, 2015 at First Lutheran Church, Mandan, with Reverend Lee Herberg officiating. Burial will be at St. John’s Cemetery, south of Mandan.

Visitation will be held from 2 to 8 pm on Monday, February 16, 2015 at Buehler-Larson Funeral Home, Mandan, with a prayer service at 7 pm. Visitation will continue one hour prior to the service at the church on Tuesday.

Jim was born February 15, 1939 in Mandan, the son of Louis and Sylvia (Bures) Svihla. He was raised southwest of Mandan where he attended school through 8th grade and then started farming with his father. Jim worked for Kist Livestock where he discovered his love of auctioneering. In March of 1957 he graduated from the Reisch American School of Auctioneering in Mason City, Iowa. He enjoyed being an auctioneer and selling all types of sales, especially livestock. He sold cattle at Missouri Slope Livestock in Bismarck, and also Minot, Harvey, Carrington, and Ellendale Livestock. In 1962, Jim joined the National Guard and proudly served until his honorable discharge as a Sergeant in 1968. It was also during this time that Jim bought the family farm and started driving truck. On December 30, 1966, Jim was united in marriage to Ernestine Monson. They lived south of Mandan where they farmed, worked together in both the auction and trucking business, and raised two daughters. Jim started driving truck full-time in 1978 when he and Ernestine started J.L. Svihla Trucking. They shared 38 years together, Ernestine died in July 2005. Jim retired from trucking in November 2010. Jim will be remembered for his quick wit, sense of humor, and love of family and friends. He enjoyed watching baseball, particularly the Minnesota Twins and the New York Yankees. In his retirement years, Jim enjoyed attending his grandchildren’s school and sporting events. Other favorite activities included fishing, camping, going to the casino, and his daily stops at the Silver Clipper Barber Shop in Mandan. His trip to Billings in 2014 to attend the Diamond Ring Auction where he was able to visit Pat and Joe Goggins was something he spoke of often. Jim was a member of First Lutheran Church, the Mandan Moose, and the Mandan Eagles. A fun man with a smile for everyone and a hug for any who’d let him, Jim was a friend to all and will be missed by all who knew and loved him.

Blessed to have shared his life are his two daughters and sons-in-law, Kay and Randy Miller and Kim and Michael Pittman, all of Mandan; five grandchildren, Karamea and Logan Miller and Courtney, Casey, and Carsen Pittman; one sister and brother-in-law, Dorothy and Bob Kottsick, Mandan; two sisters-in-law, Rosalie Svihla and Sandy Svihla, both of Mandan; and several nieces, nephews, and countless friends.

Jim was preceded in death by his parents; his wife; and three brothers, Ervin, Glenn, and Elgie Svihla.
To order memorial trees or send flowers to the family in memory of Jim Svihla, please visit our flower store.