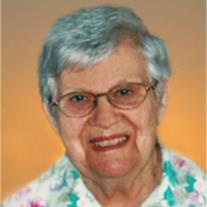 A funeral service will be held at 11 am on Saturday, February 13, 2016 at Messiah Lutheran Church, Mandan. Burial will be at Zion Lutheran Cemetery in New Salem at 2 pm.

Visitation will be held from 10 am to 8 pm on Friday, February 12, 2016 at Buehler-Larson Funeral Home, Mandan, with a prayer service at 7 pm. Visitation will continue one hour prior to the service at the church on Saturday.

Jeannette was born October 30, 1924 in Bath, SD, the daughter of Floyd and Iva (Williams) Chalcraft. She grew up and attended public school in Hettinger, ND. On October 4, 1943 she married James H. Loehrke Sr. at Camp Berkeley in Abilene, TX where he was stationed prior to being shipped overseas. After his return, James started his own trucking company and Jeannette was his secretary. Jean and Jim made their home base in Judson, but in the early years the young family traveled wherever the road construction work was, whether it was North Dakota, South Dakota, Wyoming, or Montana. Later, as the children grew, their home became settled in Judson where Jeannette enjoyed gardening, sewing, camping, and baking. Her love of flowers started when she was a young woman working for a large flower nursery in California.

Jeannette was a 4-H leader for many years and influenced many young girls with her excellent sewing skills. After their retirement in 1975, Jean and Jim spent much of the next 27 winters looking for a place to escape the wind. They traveled in an Air Stream and spent many of those winters in the Mesa and Yuma, Arizona area. When they returned to ND in the spring, Jean would help transplant young seedlings at Paula’s Plants in New Salem.

Jeannette was preceded in death by her parents; her husband James in 2008; brothers and sister-in-laws, Grant (Donna) Loehrke and Dale (Lydia) Loehrke; brother-in-law, Darrell Goodspeed; and son-in-laws, Alan Schneider and Roger “Gus” Holle.
To order memorial trees or send flowers to the family in memory of Jeannette Loehrke, please visit our flower store.