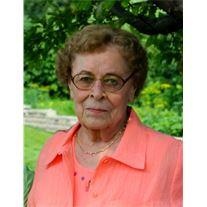 JeAnne Bumann, 79, New Salem, died October 22, 2013 at Sanford Health, Bismarck.
A funeral service will be held at 11:00 am on Saturday, October 26, 2013 at Peace Church, New Salem, with Reverend Joshua Eddy officiating. Cremation has taken place and the family will greet friends one hour prior to the service at the church on Saturday. Burial will be at Peace Cemetery.
JeAnne was born December 11, 1933 at the Britton House in New Salem to William and Amelia (Bopp) Starck. Graduating from New Salem High School in 1950 she went on to work at the Department of Transportation at the state capitol for a short time. On June 10, 1952 she married Gene Bumann in New Salem. A dedicated farm wife and mother to their two children, JeAnne was proud of the farm and her family. She loved family get togethers, especially at Christmas. A wonderful baker, JeAnne was known for her delicious brownies. She also liked to read, crochet, gardening, and flowers. She liked staying close to home and going to Bismarck was a “trip” to her. After Gene’s death in February 1996 she moved into New Salem to be closer to family and friends. A caring mother and grandmother, she will be missed by those who knew and loved her.
Blessed to have shared her life is her daughter, Susan (Rod) McGinnis, Elko, NV; son, Larry (Donna) Bumann, New Salem; five grandchildren, Daren (Talitha) McGinnis, Sheila (Brian) Blotsky, Chad (Christy) McGinnis, Tanner (Elizabeth) McGinnis, and Justin Bumann; five great grandchildren, Brianna, Sierra, Brody, Cooper, and Gunnar; two sisters, Anita Siegle, Missoula, MT and Laverne (Marvin) Schulz, New Salem; and brother and sister-in-law, Delbert and Corrie Bumann, New Salem.
JeAnne was preceded in death by her husband in 1996; her parents; and brother-in-law, Walt Siegle.
In lieu of flowers the family prefers memorials to the New Salem Ambulance Service.
To order memorial trees or send flowers to the family in memory of JeAnne Bumann, please visit our flower store.