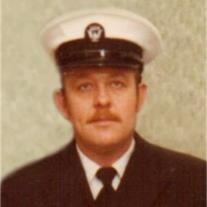 James “Jim” Wetsch died on June 9, 2016 in Bismarck, North Dakota after a short battle with cancer.

Mass of Christian Burial will be held at 1:30 pm on Monday, June 13, 2016 at Christ the King Catholic Church, Mandan, with Father Nick Schneider celebrating. Burial will be at the North Dakota Veterans Cemetery with full military honors.

Visitation will be held from 4 to 8 pm on Sunday, June 12, 2016 at Buehler-Larson Funeral Home, Mandan, with a Knights of Columbus Rosary and Parish Vigil at 7 pm..

Jim was born to Anton and Eleanor (Rambur) Wetsch on March 18, 1940, in Mandan, ND. After Jim’s parents died when he was three years old, Jim was raised by his grandparents, Frank and Helen (Kuntz) Rambur. Jim’s aunt and uncle - Thomas Rambur and Caroline (Rambur) Barrios, were like a brother and sister to him. On March 25, 1961 Jim married Clara Doll. They had two children, Mark Wetsch of Mandan and Cindy Stegmeier of Glendale, Arizona.

Jim joined the service when he was 17 years old in June 1957 and retired in February 1977. Upon returning to his hometown, he worked 14 years at the North Dakota State Industrial School before starting his own business, the Yard Dog, which he operated for 12 years. After his retirement, Jim and Clara bought a home in the Mesa, Arizona area and loved to go there to escape the North Dakota winters. They sold their home earlier this year and returned to Mandan.

Jim served 20 years in the U.S. Navy and was proud of his service and his country. He was also proud of his German/Russian heritage and his family. He was a member of Christ the King Catholic Church in Mandan along with the Moose, Eagles, Knights of Columbus, American Legion, Veterans of Foreign Wars, and Disabled American Veterans.

Jim is survived by his wife of 55 years, Clara (Doll) Wetsch, Mandan; his children and their spouses, Mark (Watena) Wetsch and Cindy (Craig) Stegmeier; five grandchildren, Paden and KayLynn Wetsch and Alexis, Jacob, and Zachary Stegmeier; and special extended family, Brenda (Wetsch) and Justin Honrath, and their children Kristy and Brent Ziniel.

Jim was preceded in death by his parents, Anton and Eleanor Wetsch; his grandparents, Frank and Helen Rambur and Joseph and Margaret (Serr) Wetsch; and his uncle and aunt Thomas Rambur and Caroline Barrios.
To order memorial trees or send flowers to the family in memory of James Wetsch, please visit our flower store.