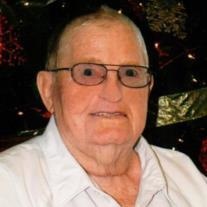 Mass of Christian burial will be held at 10:30 am on Wednesday, December 31, 2014 at St. Joseph Catholic Church, Mandan. Burial will be at Mandan Union Cemetery. Cremation has taken place and the family will greet friends one hour prior to the service at the church.

Jack was born November 3, 1926 in Mandan to Philip and Rose (Hatzenbuehler) Mosbrucker. He grew up in Center until his family moved to Mandan. Jack worked on the family farm near Center and also Noon Light Cement Company. On October 22, 1945 he married Katherine Roshau in Center and they made their home in Mandan. Jack worked as a butcher for Missouri Valley Meats for many years. He enjoyed his job, especially making sausage. Jack loved hunting and fishing with his children, grandchildren, and nephews. Family gatherings were very special to him. Jack also enjoyed playing harmonica, pinochle, and bowling. He was a member of the Mandan Eagles and Moose Clubs.

Jack was preceded in death by his parents; his wife in 2003; one daughter, Bonnie; two sons, Manny and Danny; son-in-law, Marty Dunn; four sisters, Margaret, Isabelle, Eva, and Mary; four brothers, Ralph, Jimmy, Philip Jr., Matt; and one grandchild.
To order memorial trees or send flowers to the family in memory of Jack Mosbrucker, please visit our flower store.