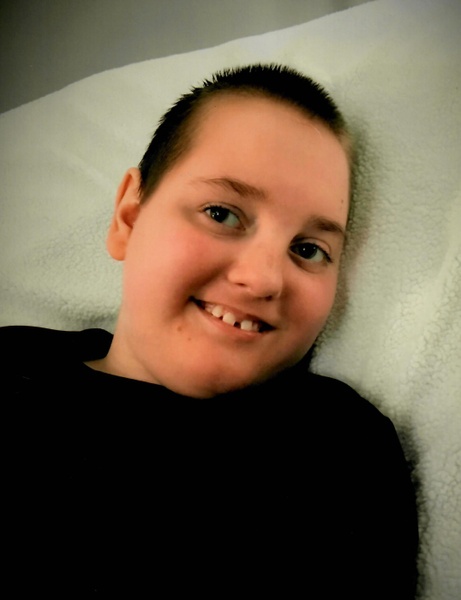 A funeral service will be held at 10:30 AM on Tuesday, May 28, 2019 at First Presbyterian Church, Mandan, with Rev. Deanna Reikow officiating.  Burial will be at St. John’s Cemetery, south of Mandan.

Jace was born October 5, 2005 at 3:50 AM, a tiny, 2lb. 2oz., unexpected miracle.  He fought for his life from the very beginning.  With the help of Dr. Ocejo and his team, Jace survived.  He was given his middle name from his special Great Grandpa, Gary Fisher.  Jace’s Grandma Sandy made him a promise while he was still in the NICU, that if he would continue to fight, she would never leave his side. She kept that promise to the moment he took his last breath.  Jace was baptized at First Presbyterian Church as a child of God.  His Godparents are his aunt and uncle, Kaylee and Joe Schlosser.

Jace’s dark blue eyes could light up a room.  He had the kindest heart and the purest of souls.  Jace was the one true definition of innocence, happiness, and love and he touched our lives in ways that no one else ever could have. The way this special little boy impacted our lives, made each and every one of us a better person.

Very early on, Jace was diagnosed with cerebral palsy and overcame many obstacles through the years. No matter what he faced, Jace continued to melt our hearts with his sweet smile and laughter.  He tackled more surgeries, procedures, and hospitalizations than any little boy should have to endure.  Many of the Sandford doctors, especially Dr. Ocejo, the nursing staff, and therapists became like family to us.  The humor that we shared with Dr. Ocejo and the 6th floor nurses helped get us through some of the toughest times of Jace’s life.  After each illness and hospitalization, we would hope and pray that he would find some relief from his pain that often consumed his little body.

Jace started with BECEP Preschool, attending speech, physical, and occupational therapy as well as hydrotherapy. Jace also attended Fort Lincoln Elementary.  During that time, he was hospitalized on a regular basis.  Because of his compromised immune system, it was decided that it would be in his best interest for him to continue his education in his own home.  Jace was lucky enough to have Sue Almer as his teacher for many years.  She often commissioned her husband to create things to help Jace learn and perform tasks.  Sometimes we think that they taught each other.  Jace was a fifth grader at Fort Lincoln Elementary in Mr. Bitz’s class. His current teacher, Kelly Frederick was providing him with Home Bound Services. He quickly took to her infectious personality and looked forward to her visits.

During his frequent hospital stays, Jace would flirt with the nurses and a bond was formed that continued all the way up to his last hospitalization this past Mother’s Day.

Jace’s favorite thing to do was to listen to and watch his cartoons. He had cartoons playing every minute of every day, no matter where he went or what he was doing. That was his true happiness.

Jace’s Grandma Sandy was his full-time guardian and caregiver in her home.  He filled her heart in more ways than she ever thought possible. His Aunt Kaylee and Uncle Coleton also helped care for him his entire life.  All of them loved him like he was their own child.  Grandma, Kaylee, and Coleton sacrificed selflessly, without complaint or hesitation, to make sure Jace always had the care that he needed to thrive.  It was always a team effort of everyone pitching in wherever and whenever they were needed.  With that, Jace always had the most loving care possible.  He gave back more to his caregivers than they gave to him.  Jace was blessed to have some of the most talented caregivers in his thirteen years of life.  Thanks to Jace, new family bonds were formed that will continue for our entire lives.

Although Jace’s disabilities prevented him from walking and talking, he thrived in many other ways.  He and his sister, Kambree, shared a special sibling bond.  Jace was a proud big brother, and Kambree had unconditional love for him.  She contributed and helped care for him as well. Most of Jace’s days were also spent with his cousin, Aubree, and they enjoyed watching cartoons together.

Jace proudly participated in the Great American Bike Race (GABR) from an early age. He had many dedicated and wonderful supporters on his two teams, The Jacer’s and the Jace Racers.

While at Sandford Children’s Hospital in Sioux Falls over Easter weekend 2019, Jace was diagnosed with chronic respiratory failure due to mixed tone cerebral palsy. With this diagnosis we knew his time left on this earth was going to be precious, but no one ever thought it was going to happen this soon.  This past week when Jace left Sandford Hospital in Bismarck, sorrow filled our hearts. We surrounded him with all our love and prayers.  Our only hope and wish for him was to find some comfort and peace.  With the help of the CHI Hospice Team, a special nurse, Grant, provided the personalized care that our family needed to help Jace find that comfort and peace. We will be forever grateful for him going above and beyond for Jace.

Jace left this earth being held in his grandma’s arms with his entire family by his side comforting him.

Memorials are preferred to the family and will be used for memorials in Jace’s name to several healthcare facilities that cared for Jace.

To order memorial trees or send flowers to the family in memory of Jace Schmidt, please visit our flower store.
Open