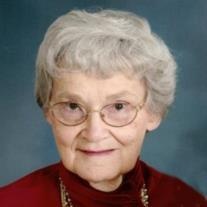 A funeral service will be held at 12 noon on Friday, November 20, 2015 at Peach Church, New Salem, with Reverend Joshua Eddy officiating. Burial will be at Bethel Cemetery.

Visitation will be held from 3 to 8 pm on Thursday, November 19, 2015 at Peace Church in New Salem, with a prayer service at 7pm. Visitation will continue one hour prior to the service at the church on Friday.

Irene was born November 18, 1930 in Williston, ND, the daughter of Melvin and Hilda (Rodahl) Dragseth of rural Zahl, ND. She attended country school and graduated from Zahl High School. Upon graduation, she entered the Bismarck Hospital School of Nursing in September 1949, and graduated as a registered nurse in June 1953.

On June 6, 1953 she married Delbert Kaelberer of New Salem at the Lutheran Church in Zahl. They lived on the family farm south of New Salem all of their lives. To this union three sons were born, Kent, Reed, and Paul.

Irene worked part time as a nurse for most of her life. She started at Bismarck Hospital, mainly in the Emergency Department. In 1979 she went to work at the New Salem Q & R Clinic where she enjoyed working until her retirement in December of 1994. She was a member of the American Nurses Association for several years.

Delbert and Irene traveled to many places during their winter vacations. Following their retirements, they bought a trailer at Country Roads Retirement Village in Yuma, AZ, spending 17 winters there together.

Irene was preceded in death by her husband of 56 years, Delbert, in 2010; her brother, Mervin Dragseth; brother-in-law, Kenneth Kaelberer; her parents; and several aunts and uncles.
To order memorial trees or send flowers to the family in memory of Irene Kaelberer, please visit our flower store.