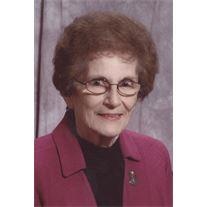 Irene Brockel, Mandan, formerly of Underwood, died December 17, 2013 at her home with family by her side.
A funeral service will be held at 11:00 am on Friday, December 20, 2013 at Bismarck Baptist Church. Burial will be at a later date in Eureka, SD. The family will greet friends one hour prior to the service at the church.
Irene was born in McPherson County, SD on the 1st day of summer in 1933 to loving parents, Benjamin and Anna (Nies) Bertsch. After graduating from Eureka High School in 1951, Irene taught at a country school. During this time, Irene fell in love with Delene Brockel, the man who made her laugh. The couple married on June 15, 1952 in the Eureka First Baptist Church and was together for over 50 years. They made their home in Eureka, SD and started their family. Irene worked as a bookkeeper for the Eureka Equity Exchange and earned her teaching certificate from Northern State Teachers College in Aberdeen, SD. Later, the family moved to North Dakota and eventually settled in Goodrich. While living in Goodrich, Irene was a bookkeeper at the Farmers Union Elevator in Wing. The family moved to Underwood where Irene worked as the business manager at the Underwood High School. She retired from the Underwood High School with over 20 years of service. An active member of the First Baptist Church and later the Faith Evangelical Church in Underwood, she played organ for many years and maintained the church financial records. Irene was a dedicated member of the community and served as an officer of several organizations. Irene moved to Mandan after retirement and became a member of the Bismarck Baptist Church where she was able to reconnect with old friends. Although Irene loved to travel, her fondest memories were times spent with her family and friends. Irene will be remembered for her caring heart, her devotion to family and friends, and the special twinkle in her eyes. She lived each day of her life with strength, humor, and grace.
Irene is survived by three daughters, Julie (James) Sailor, Devils Lake, Gina Brockel and Becky Brockel, both of Mandan; two grandsons, Joshua Sailor and Jamie (Marla) Sailor, all of Devils Lake; 2 great grandchildren, Joshua and Brittyn Sailor, Devils Lake; one sister, Phyllis Huber, Wishek; and many nieces and nephews.
Irene was preceded in death by her husband, Delene Brockel in 2004; her parents; and two brothers, Oswald and Alvin Bertsch.
In lieu of flowers memorials are preferred to the Anne Carlson Center, 701 3rd St NW
Jamestown, ND 58401.
To order memorial trees or send flowers to the family in memory of Irene Brockel, please visit our flower store.