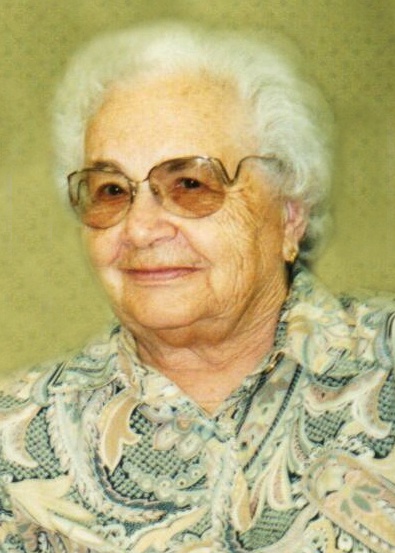 A funeral service will be held at 10:30 am on Thursday, August 3, 2017 at St. Peter Lutheran Church, Hannover, with Rev. Russell Fitch officiating. Burial will be at Hannover Cemetery.

Visitation will be held from 5 to 8 pm on Wednesday, August 2, 2017 at St. Peter Lutheran Church, Hannover, with a prayer service at 7 pm. Visitation will continue one hour prior to the service at the church on Thursday.

Hilda Marie was born on the family farm northeast of Hannover on February 20, 1921, the second of eight children to Herman W. and Rosetta (Kern) Henke. Hilda attended school in Hannover through the 8th grade and completed two years of high school through correspondence. Hilda worked for Nels and Sophia Jensen where she met her future husband, Forrest. She lived in Halliday and worked at the grocery store. She also worked at the grocery store in Hazen and then moved back to Hannover and helped her Uncle Bill and Aunt Dora with the store, post office, and John Deere dealership in Hannover. On April 28, 1946 Hilda and Forrest Jensen were married and lived in Bismarck. In April 1947 they moved to the farm where they raised three sons, Wayne, Marc, and Byron.

Hilda enjoyed many hobbies over the years including embroidery, beading, quilting, wreath making, Christmas ornaments, china painting, etc. She loved to garden and took much pride in her canning and freezing produce. Hilda was a lifelong member of St. Peter’s Lutheran Women Missionary League, sang in the church choir, taught Sunday school, and was a member of Hannover Farmeretts Homemakers Club for many years. Her biggest joy of all was spending time with her grandkids, great grandkids, and she felt it to be such an honor to have been blessed with great-great grandkids. Her grandkids have many memories of their trips to the zoo, picnics, over nights, playing dress-up, games, and just spending time with her. She taught them many of her crafts as well. Hilda always loved a good game of cribbage, pinochle, and many other card games. Hilda continued to live on the farm after Forrest’s death in 2005 and then in 2010 Hilda moved to Senior Suites in Hazen. In April 2015 she moved to Elm Crest Manor in New Salem.

Hilda was preceded in death by her husband in 2005; her parents; two brothers, Rueben and Wilbert; one sister, Dorothy; as well as two grandchildren, Abbey Jensen and Jonathon Jensen.

Hilda’s steadfast love and belief in her Savior will be instilled forever in the hearts of all who knew her. She will be deeply missed and forever in our hearts. To order memorial trees or send flowers to the family in memory of Hilda Jensen, please visit our flower store.