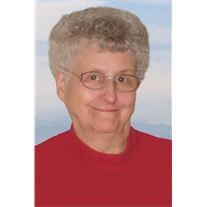 Helen Kleinjan, 78, New Salem, died September 18, 2012 in New Salem after a courageous battle with cancer.
A funeral service will be held at 11 am on Friday, September 21, 2012 at St. Pius V Catholic Church, New Salem, with Reverend Selva Periannan as celebrant and Reverend Chad Gion as concelebrant. Cremation has taken place and burial will be at 11 am on Monday, September 24, 2012 at the North Dakota Veterans Cemetery, south of Mandan.
Visitation will be held from 5 to 7 pm on Thursday, September 20 at St. Pius V Catholic Church with a parish vigil/rosary at 7pm. Visitation will continue one hour prior to the service at the church on Friday.
Helen was born in Mott on November 26, 1933 to John and Elizabeth (Schorsch) Roth. She graduated from Mott High School in 1952. On April 9, 1953 she was united in marriage to James “Jim” Kleinjan at St. Vincent’s Catholic Church in Mott. They spent their first 22 years of their marriage in Bentley and Mott, moving to New Salem in 1975 where they have resided since.
Helen operated a daycare in her home in New Salem for many years. She then worked at Elm Crest Manor as a Cook and Dietary Aide for 19 years. Helen was a member of the Woman’s Life Society, the American Legion Auxiliary, and the Christian Mothers. Additionally, she taught CCD for many years. She was an avid sports fan in Mott and New Salem while her children participated. Even after her own children graduated, Helen continued to be a great supporter and fan of the New Salem Holsteins high school sports teams. She was still, at the end of her life, rooting for a victory in last Friday’s football home opener.
Blessed to have shared her life is her husband of 59 years, Jim Kleinjan (New Salem); sons and daughters-in-law- Rod and Amy Kleinjan (Dickinson), Randy and Linda Kleinjan (Bismarck), Scott and Kris Kleinjan (Bismarck), Steve and Lisa Kleinjan (New Salem), and Troy and Connie Kleinjan (Bismarck); daughter and son-in-law- Nancy and Tom Beck (Minneapolis); 10 grandchildren and 4 great grandchildren; 2 sister-in-laws- Clara (Roth) Esselback (Mount Vernon, WA) and Shirley Roth (Stanwood, WA); Jim’s brother and wife- Loren and Arlene Kleinjan (Mandan); and numerous nieces and nephews.
Helen was preceded in death by her parents; brothers- Arnold Roth, Roy Roth, and John Roth; and sisters- Viola Gress and Elnora Roth.
Memorials are preferred to the New Salem-Almont Athletics in memory of Helen Kleinjan.
To order memorial trees or send flowers to the family in memory of Helen Kleinjan, please visit our flower store.