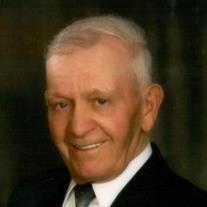 Harry Anton Stastny was born July 31, 1927, to Anton and Rose (Kilian) Stastny in Bismarck, ND. Harry assisted with the family farm and continued to help out after his father’s death. On February 4, 1961, Harry married the love of his life, Linda Dietrich, at First Lutheran Church in Mandan. The couple made their home in Bismarck. During this time, Harry worked at the Dakota Brewery and then at North Dakota Concrete. Often, during the week, he would drive back to the farm and continue his day of work. Later, Harry took a full time job at Northern Great Plains Research Center and moved to Mandan. He spent nearly 30 years working as a maintenance man before retiring. Also during this time, Harry assisted his wife, Linda, in doing custodial work at First Lutheran Church in Mandan.

Harry loved farming. Whether he was cultivating corn or milking cows, he enjoyed his time on the farm. Harry loved his dogs, going deer hunting, the Minnesota Twins, and enjoyed bowling for many years. Giving of his time and friendship, Harry was always willing to lend a helping hand. His family was very important to him. Harry was a great provider for his family, and he treasured the time he spent with wife, children, grandchildren, and other relatives.


He was preceded in death by his parents, Anton and Rose Stastny; brother, Leon Stastny; his twin brother, Harold Stastny; and parents-in-law, Richard Sr. and Vivian Dietrich.
To order memorial trees or send flowers to the family in memory of Harry Stastny, please visit our flower store.