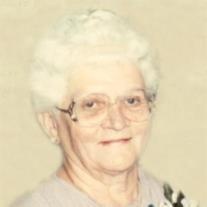 Harriet was born to Fred and Alma (Schmeling) Kuch on July 5, 1925 in Center and grew up near Churchtown. She attended Lincoln High School and later taught grade school at the Sunnyside Country School. Harriet met her husband, Ervin, while attending high school. They were married on November 19, 1945. They had 11 children and lived in Center.

Harriet’s life revolved entirely around her family. As a mother she loved watching her children’s sporting events. As the grandchildren and great grandchildren arrived, Grandma H made every attempt to attend their events. When Harriet’s kids were little they enjoyed the benefits of her great cooking, especially loving her fried potatoes and hot dishes, she made a little go a long way. For the grandkids, fleishkuechla, sugar kuchen, rosettes, and fluffy white frosting were favorites. No one could mimic Harriet’s potato salad, although many have tried. She insisted on eating at McDonalds on her trips to Bismarck and would have a Happy Meal to eat in the car. Camping, fishing, watching the Minnesota Twins baseball games, and going to Prairie Knights Casino were some of her favorite pastimes

Harriet was a member of the St. Paul Lutheran Church, the Golden Age Club of Center, and she was an honorary Gold Star Mother of the American Legion Auxiliary.

Harriet was preceded in death by her parents, Fred and Alma Kuch; her sister, Charlotte Henke; and brother, Frederick Kuch. Her oldest son, Michael, was killed in 1968 in Vietnam, her husband, Ervin, died in 1989, a daughter-in-law, Judy, and a granddaughter-in-law, Julie Vice-Hagel also preceded her in death.

Memorials will be donated to the Center Golden Age Club and the Oliver County Ambulance fund.
To order memorial trees or send flowers to the family in memory of Harriet Meyhoff, please visit our flower store.