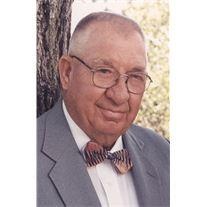 Grant Loehrke, 85, Bismarck, formerly of Judson, died March 29, 2013 at Sanford on Sunset, Mandan.
A funeral service will be held at 11:00 am on Tuesday, April 2, 2013 at Zion Lutheran Church, Bismarck, with Reverend Thomas R. Marcis Jr. officiating. Burial will be at Graceland Cemetery, New Salem.
Visitation will be held from 4 to 7 pm on Monday, April 1, 2013 at Buehler-Larson Funeral Home, Mandan, with a prayer service at 6 pm. Visitation will continue one hour prior to the service at the church on Tuesday.
Grant was born July 5, 1927 to Hubert and Mamie (Nickel) Loehrke. He was born and raised on the family farm south of Judson. Graduating from New Salem High School in 1946 he served from 1948-1951 in the National Guard. Grant obtained his teaching certificate and taught for one year. On October 5, 1951 he married Donna Purcell in Minot. In 1952 Grant and his brother, James, started Loehrke Bros. Construction. They worked in many states building roads. Grant and Donna lived in Judson until 1983 when they moved to Fort Rice. Grant loved to fish and spent many hours on the river. To him, there wasn’t a fish he couldn’t eat. He passed on his love of fishing to the next generation by giving each grandchild their first “Snoopy” fishing pole. A talented green thumb, Grant loved to garden and always had more than he could use. He loved to raise flowers and always had apple trees in his yard. Watching the Phoenix Suns and Denver Broncos was something he enjoyed doing. Following his retirement in 1988, he and Donna spent winters in Bullhead City, AZ. He loved the idea that he could have a garden all year long. In 2008 Grant and Donna moved to Bismarck where he resided until entering Sanford on Sunset in December 2012 due to declining health. A beloved husband, father, and grandfather, he will be missed by those who knew and loved him.
Blessed to have shared his life is his wife of 61 years, Donna Loehrke, Bismarck; five children, Donald Loehrke, Deborah Mindt, Patty (Rick) Borner, all of Bismarck, Brenda (Kevin) Borner, Washburn, and Dennis (Marlene) Loehrke, Bismarck; six grandchildren, Melissa (Shawn) Sullivan, Samantha Borner, Caitlin Borner (Ethan Wacker), Hanna Borner (Josh Hulm), Kayle Borner, and Matthew Loehrke; one great grandchild, Ember Sullivan; six step grandchildren, Domonic, Mary, Dawson, Brandon, Bruce, and Jolene; two sisters, Joanne (Jim) Arney, St. Regis, MT and Joyce Mormann, Largo, FL; and a sister-in-law, Jean Loehrke, Bismarck.
Grant was preceded in death by his parents; three brothers, infant Glen, James, and Jack “Dale” (Lydia); and son-in-law, Peter Mindt.
The family prefers memorials to the Dakota Boys Ranch.
Please go to www.buehlerlarson.com to sign the online guestbook.
To order memorial trees or send flowers to the family in memory of Grant Loehrke, please visit our flower store.