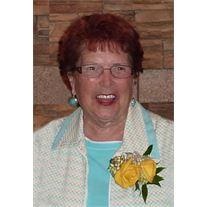 Grace Lobeck, 81, formerly of Mandan, passed away March 12, 2012 at her home in Sun Lakes, AZ.
Mass of Christian Burial will be held at 10:30 am on Tuesday, March 20, 2012 at St. Joseph’s Catholic Church, Mandan, with Reverend Shane Campbell as celebrant and Reverend Fred Harvey as concelebrant and homilist. Burial will be at the North Dakota Veterans Cemetery south of Mandan.
Visitation will be held from 6 to 9 pm on Monday, March 19, 2012 at Buehler-Larson Funeral Home, Mandan, with a Parish Rosary / Vigil at 7 pm. Visitation will continue one hour prior to the service at the church on Tuesday.
Grace was known to family and friends lovingly as “G”, a nickname that her oldest grandson, A.J., coined as he couldn’t quite get “Grandma Grace” out as he was starting to talk. Since it was a nickname created by one of her most cherished things in life – her grandchildren – she insisted it had to stay!
Oakes, ND was Grace’s birthplace on November 12, 1930 to parents Tom and Nell (Farrell) Sabby. She grew up in Verona, ND with her parents and three sisters, graduating from Verona High School in 1948. Grace started the family heritage of playing basketball, being named to the All-State basketball team and leading her team to the State Tournament. All three of her children enjoyed many years of basketball, as well as her grandsons, and she could always be talked into a friendly game of “Horse” at the lake or in the driveway.
Grace married Al Lobeck, also of Verona, in 1951. They lived in Fargo for the first few years of their marriage and moved to Mandan in 1954 where they resided until they moved to AZ in 2006. They celebrated their 60th wedding anniversary with all of their children and grandchildren in Sun Lakes, AZ last September. While in Mandan, Grace worked for many years and retired from the Agricultural Research Center. Before moving away from Mandan, she loved working for the Mandan News.
There’s not a person that ever met Grace that didn’t remember her. She was vibrant, full of energy and life, and loved to be the life of the party. She enjoyed all games…cards of all kinds, sports, spending time at the lake, fishing, and she didn’t miss many Bingo games. If there was a gathering of four people and there was a deck of cards, you can be sure that no one would be allowed to leave until they played! She had a fun-loving competitiveness that everyone enjoyed. Another love was following NBA basketball, specifically Phil Jackson. She watched Phil play basketball in high school, was an avid Chicago Bulls fan while he coached there, and probably one of the biggest Lakers fans there was!
Next to Al, Grace’s biggest love was her five grandsons and step-grandson. She loved spending time with them, baking cookies, playing games, laughing, watching their sports, and just hanging out.
She is survived by her husband, Al Lobeck of Sun Lakes, AZ; three children, Jeff (Stephanie) Lobeck of Chandler, AZ, Jim “Jimmer” (Tana) Lobeck of Mandan, and Becky (Greg) Haider of Peoria, IL; grandchildren, Alex (A.J.) and Zachary Lobeck of Chandler, AZ, Kaden and Brogan Lobeck of Mandan, and Jordan Thomas Haider of Peoria, IL and step-grandson, Britain Bentz of Mandan; three sisters, Carolyn Berry of Lamoure, ND, Bonnie Christensen of Verona, and Donna Ritter of Brookings, SD; as well as many cherished nieces, nephews, and cousins, and special friends that are too numerous to name. She will be greatly missed by everyone and gatherings without her won’t be the same.
Grace was preceded in death by her parents, Tom and Nell Sabby; brothers-in-law, George Berry, Louis Christensen, Richard Ritter, and James C. Lobeck; nieces, Lori Ann Christensen and Laurie Berry; as well as many cherished aunts, uncles, and cousins.
Memorial donations will be used towards a memorial bench at St. Joseph’s Church.
To order memorial trees or send flowers to the family in memory of Grace Lobeck, please visit our flower store.