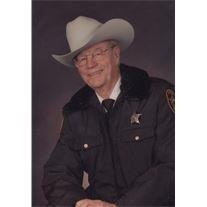 Gordon Albers, 84, Center, died unexpectedly on November 10, 2012.
A funeral service will be held at 10:30 am on Thursday, November 15, 2012 at St. Paul‘s Lutheran Church, Center, with Reverend Dennis Ristvedt officiating. Burial will be at the North Dakota Veterans Cemetery with full military honors.
Visitation will be held from 4 to 8 pm on Wednesday, November 14, 2012 at St. Paul’s Lutheran Church, Center, and continue one hour prior to the service at the church on Thursday.
Gordon was born March 31, 1928 in Center to Christ and Mabel (Vogel) Albers. He attended schools in Oliver County. In 1951 he was drafted into the US Army during the Korean War, serving for two years. He later worked in California before returning to ND where he worked as an adjustor for Nodak Mutual Insurance Agency. In the spring of 1967 Gordon was appointed Chief of Police of Center and Deputy Sheriff of Oliver County. In March 1968 he was appointed Sheriff following the death of Sheriff Helvig and was elected Sheriff in 1972, a job he was devoted to until his retirement in January 1999. Gordon helped to organize the security at Minnkota Power when Unit One was built. In 1974 he was elected President of the ND Sheriff’s Association and appointed to the ND Law Enforcement Council by Governor Link. He was a member of the Elks, Peace Officers Association, American Legion, and Board of Trustees for the ND Cowboy Hall of Fame. An honest man and giving man, dedicated to his community and friends, Gordon will be missed by all who knew him.
Those who shared his life are two brothers, Dewey (Gloria) and Donald (Cecelia); sister-in-law, Josephine; nephews, Chris, Donnie, Glen, Kurt, Scott, Jeff, and Wesley; nieces, Carla, Karen, Melody, Jean, Frances, and Susan; many great nieces and nephews; brother-in-law, Clair Rolfe; and special friend, Joyce Kitt.
Gordon was preceded in death by his parents; sister, Joyce; brother, Ramon; nephew, Robert; and great nephew, Alex.
The family prefers memorials to St. Paul’s Lutheran Church in memory of Gordon.
To order memorial trees or send flowers to the family in memory of Gordon Albers, please visit our flower store.