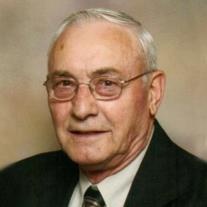 A funeral service will be held at 11 am on Monday, August 10, 2015 at First Lutheran Church, Mandan, with Reverend Lee Herberg officiating. Burial will be at 2 pm at the North Dakota Veterans Cemetery with full military honors.

Visitation will be held from 4 to 7 pm on Sunday, August 9 at First Lutheran Church, Mandan, and continue one hour prior to the service at the church on Monday.

Glen was born in Bismarck on January 25, 1934 to Lester and Aileen (Magee) White, and was raised on a farm north of Tappen. After graduating from Steele High School in 1952 he entered the U.S. Army, earning sharpshooter distinction. He operated a dozer, building mountain cliff roads while stationed in Austria and Germany as an SP3 of the 76th Engineer Battalion. Glen attended Wahpeton State School of Science, earning a degree in Auto Mechanics, and was named Homecoming King.

He married Loretta Trautmann of Robinson on September 21, 1958. They farmed near Robinson for 11 years, moved to Jamestown, and then to Mandan in 1973, where Glen was a mechanic and worked in construction. In 1981 they purchased the TP Motel in Mandan where they resided at the time of his death.

In July 2014 Glen was afflicted with Guillain-Barre Syndrome, and spent the past year recovering in the hospital and in the Missouri Slope Care Center. He had returned home in June, but succumbed to COPD.

Glen was ingenuitive and mechanically inclined. He was a member of the Elks, Eagles, and Moose Lodges.

He was preceded in death by his parents; infant brother Dale; nephew, Kirk White; great nephew, Brock Bowerman; brother-in-law, Lyle Dougherty; and sister-in-laws, Judy and Velma Trautmann, and Carol White.
To order memorial trees or send flowers to the family in memory of Glen White, please visit our flower store.