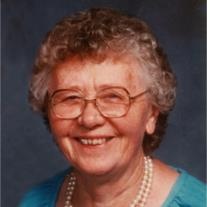 A funeral service will be held at 2 pm on Friday, January 15, 2016, at Peace Church, New Salem, with Reverend Joshua Eddy officiating. Burial will be at Peace Cemetery in the spring.

Cremation has taken place and visitation will be held one hour prior to the service at the church on Friday.

Gladys was born November 23, 1915 on the family farm just south of New Salem, the daughter of Frank C. and Helen (Christiansen) Gaebe. Educated in the New Salem Public Schools, Gladys was active in the New Salem Band, earning her first chair clarinetist. She was interested in drama and took part in high school plays. Gladys graduated from New Salem High School in 1933 and from Capital Commercial College in Bismarck in 1934. She was employed by Works Progress Administration, Capital Bottling, the Agricultural Administration (AAA) in Mandan, and the Security State Bank of New Salem. On September 27, 1941 she married Chester Toepke in New Salem. After Chester returned from serving in WWII in 1946, they moved to the William Lehde farm west of New Salem where they made their home until 1975 when they moved into New Salem. Gladys was the assessor of Caribou Township for several terms. She was also a Cooperative Observer for the National Weather Service, a tradition started by her grandfather, John Christiansen in 1906, and carried on by her father, Frank Gaebe and her brother, William F. Gaebe. She was appointed to the Morton County Social Services Board in 1970 when her mother resigned. Gladys was a longtime member of the American Legion Auxiliary in New Salem. Chester passed away in 1999. Gladys entered Elm Crest Manor in 2008 where she enjoyed playing piano.

Gladys was preceded in death by her parents; her husband, Chester; brother, William Gaebe; and son, Ronald.
To order memorial trees or send flowers to the family in memory of Gladys Toepke, please visit our flower store.