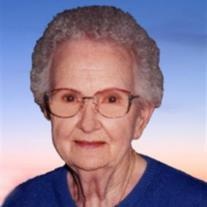 Gladys H. Hughes, 95, Bismarck, formerly of Linton, went peacefully to be with the Lord on December 21, 2014 at St. Vincent’s Care Center, Bismarck.

A funeral service will be held at 1:30 pm on Saturday, December 27, 2014 at St. Vincent’s Care Center, Bismarck, with Reverend Terry Detwiler officiating. Visitation will be held on hour prior to the service. Burial will be at the North Dakota Veterans Cemetery on Monday, December 29, 2014 at 3:00 pm.

Gladys was born November 19, 1919 in Cornell, WI to Thomas and Hilda (Westby) Thorson. She attended school at Cornell and later worked in Chippewa Falls, WI. During WWII, she worked at the ammunition plant at Lake Hallie, near Eau Claire and later was transferred to the US Rubber Co in Eau Claire. She worked there until her marriage to Leo Hughes in 1945 at Our Saviors Lutheran Church in Cornell where Gladys was also raised and confirmed. They made their home in Eau Claire and later moved to Linton, ND where they lived for many years and raised their family. Gladys taught Sunday school for several years and belonged to Ladies Aid and Circle.

Gladys was preceded in death by her parents; husband, Leo; and five brothers.
To order memorial trees or send flowers to the family in memory of Gladys Hughes, please visit our flower store.