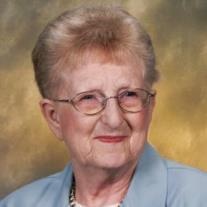 A funeral service will be held at 11 am on Saturday, February 14, 2015 at First Lutheran Church, Mandan, with Reverend Lee Herberg officiating. Burial will be in the spring at Inkster Community Cemetery, Inkster, ND.

Visitation will be held from 5 to 7 pm on Friday, February 13, 2015 at Buehler-Larson Funeral Home, Mandan, with a prayer service at 7 pm. Visitation will continue one hour prior to the service at the church on Saturday.

Gladys was born December 21, 1921 in Inkster, ND to David and Martha (Horrocks) Bannerman. She grew up at McCanna, ND where she attended grade school. Gladys graduated from Central High School in Grand Forks in 1938. On April 30, 1941 she married Floyd Dau. Together they owned and operated Dauland Shorthorn Farm with their son, Scott, until 1985. Floyd and Gladys shared 33 years together, Floyd died in 1974. Gladys moved to Mandan in 1985 to be closer to her family. Gladys was secretary of the ND Shorthorn Association from 1975-1985 and was honored in 1980 as the National Shorthorn Lassie of the Year. In 1986 she was honored by the ND Winter Show for her involvement in the Winter Show and the state’s livestock industry. She became an active member of First Lutheran Church in Mandan and was a member of Ruth Circle, served on the funeral committee, and church quilting group. Gladys was also a volunteer for RSVP in Mandan at the Golden Age Center for 19 years. Selfless and giving of her time and talents, Gladys’ family was of most importance to her and they will forever remember and love her.

Gladys was preceded in death by her parents; her husband; 2 sisters; 3 brothers; 6 sisters-in-law; and 8 brothers-in-law.
To order memorial trees or send flowers to the family in memory of Gladys Dau, please visit our flower store.