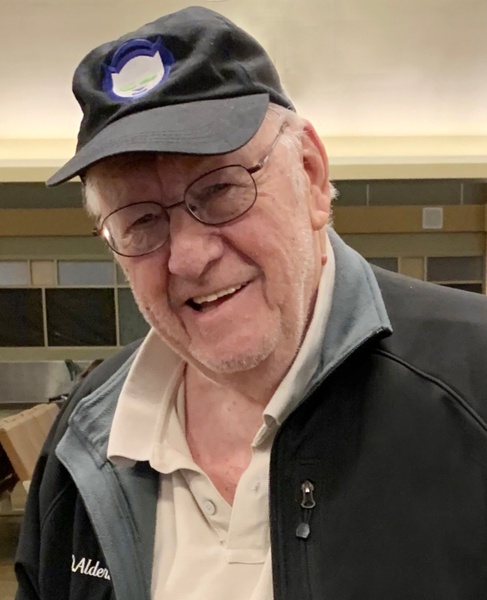 Gerald “Jerry” Alderin, 81, Center, was admitted to St. Alexius Hospital where he passed on October 17, 2020 due to severe complications of COVID.

A funeral service will be held at 11 am on Tuesday, November 10, 2020 at St. Paul Lutheran Church in Center, followed by a family interment at the North Dakota Veteran’s Cemetery at 1 pm.

Gerald Dean (Jerry) Alderin was born in Stanton, ND to Einer & Verna (Ecklund) Alderin on June 7, 1939.  Jerry met his future bride, Ardena Teske, at a dance in Beulah.  In 1959, they decided to leave North Dakota and move to California where many of their family members were living.  They were married on August 7, 1959.

In 1972, while on vacation with their daughters, Jerry & Ardena stopped in Center, North Dakota to take a break from driving their new motor home and made a decision to move back to the state that they loved.  They purchased the Front Door Bar in Center and ran the bar together until their retirement in 1983.  Jerry loved talking with his customers and they both made many great life-long friends in Center and the surrounding communities.  Their daughters, Laurie Roy and Dorann Hurley both completed their education in North Dakota before moving out of state to start their careers.  Laurie moved to California where she met her husband, Mike Roy, and raised their three beautiful girls, Alexa (29), Erika (27), and Brenna (22), before retiring in Bend, Oregon.  Dorann moved to Connecticut and started her career there, eventually moving to California and then Corvallis, Oregon and raising two great children, Hunter (24) and Taylor (21).

Jerry and Ardena moved to the country, 9 miles outside of Center, for their retirement years where they continued to make many friends and had extended family near them.  Their greatest pleasure was leaving North Dakota each winter to visit their children and grandchildren in California and Oregon.  They loved to watch them play sports and loved to entertain their grandchildren on their winter trips. Their grandchildren were truly blessed to have grandparents near them while growing up.  During the summer and fall months they loved to fish together on the Missouri River and Jerry loved to hunt with his buddies.

Jerry was the oldest of 4 siblings, and is survived by his brothers, Elsworth and Bobby Alderin and his sister, Joan Suess.  His wife of 61 years, Ardena, is currently recovering from COVID at the Missouri Slope Nursing Home in Bismarck.

To order memorial trees or send flowers to the family in memory of Gerald Alderin, please visit our flower store.
Open