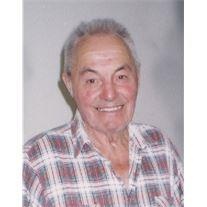 George P. Vellios, 86, New Salem, died Sunday, April 10, 2011 at Elm Crest Manor in New Salem. Funeral services will be held at2:00 PM Saturday at the Salem United Church of Christ in New Salem with the Reverend Ron Hildahl officiating. Burial will be in Graceland Cemetery, New Salem. Visitation will be from 1:00 to 2:00 PM Friday at Elm Crest Manor and at the Buehler-Larson Funeral Home Chapel in New Salem from 3:00 to 8:00 PM. Visitation will continue one hour prior to the service at the church on Saturday.
George was born on September 30, 1924 at New Salem, the son of Peter John and Annie (Morrelle Zinn) Vellios. Raised and educated in New Salem, he graduated from New Salem High School in 1943. He lived in or near New Salem all his life. George worked for several farmers in the area, finally settling with the Floyd and Nina Kunkel family for many years, where he enjoyed milking cows and did other farm work. You could probably find him on Sunday afternoons hoeing trees, which he so enjoyed. He served in the US Army in 1949 and 1950 at Camp Chaffee, Arkansas and at Ft. Bliss, Texas.
George then went to work for the New Salem Creamery in 1959 and spent nearly 40 years working there and making home deliveries. He always had time for quick visits to catch up on the news in New Salem. If the people weren’t home, he would go in and place their order in their refrigerators for them. Many younger folks now days didn’t even know his last name, just “George the Milkman”.
He retired in 1996 and moved to town. He spent his time gardening, delivering Meals on Wheels and helping out the “7th Street Neighbors” with lawn mowing, snow shoveling, delivering mail or whatever else needed doing, until he was 86 years old. Most days you could find George walking around New Salem. Whether it be to the post office or just a stroll around town, he would stop to visit with whoever was outside at the time. He had a smile for every one and enjoyed playing cards at various friends’ homes.
Although George never married or had children of his own, at Christmas time he was the “Santa Claus” of the family. He would buy gifts for all his nieces and nephews and their families and for the extended Kunkel family kids. He so enjoyed this and watching their faces light up when they’d get their gift from “Uncle George”.
Grateful for having shared his life are his sisters, Martha Kunkel of New Salem and Ellen Miller of Salem, Oregon; ten nieces and nephews and their families; the extended Vellios family; the Kunkel family; and his good friends.
He was preceded in death by his parents, Peter and Annie Vellios; a brother, Robert Vellios, who died in 2001; a sister, Esther Vellios, who died at 17 months of age in 1929; and brothers-in-law, Lorenz Kunkel and Don Miller.
Memorials are preferred to the New Salem Ambulance Service or Elm Crest Manor.
To order memorial trees or send flowers to the family in memory of George Vellios, please visit our flower store.