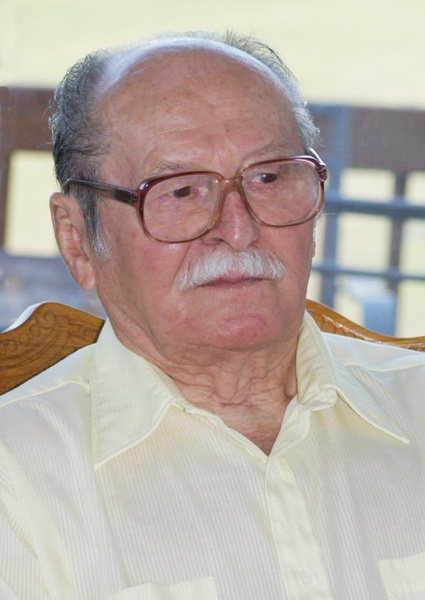 A memorial service will be held at 1:30 pm on Saturday, January 28, 2017 at Kingdom Hall of Jehovah Witnesses in Mandan. Cremation has taken place and the family will greet friends one hour prior to the service at the Kingdom Hall on Saturday.

George was born December 17, 1925, south of Mandan, to Frank and Rose (Svihla) Slezak. He graduated from Mandan High School and entered the U.S. Navy in 1944. George served in the South Pacific on the battleship Manila Bay. When he returned home, he began his life's work as an auto mechanic. Except for a short time spent in Glendive, Montana, George worked for the Remund Ford Co. in Mandan.

In 1951 George married Teresa Pope and took into his heart her daughters, Patsy, Rosalie, and Heidi. George and Teresa had two children together, Debbie Klesalek, Mandan and Ted Slezak, Cottonwood, AZ.

George owned a cabin at Lake Tschida that he generously shared with family and friends. Many happy memories were made there by all of his immediate and extended family.

George was baptized as one of Jehovah's Witnesses in May 1977. He was an example of faithfulness at Christian meetings. He always had candy or gum in his pocket to hand out to the little or not so little ones. George very much enjoyed teaching others about the bible. He helped many new and young ones develop a love of this work by taking them with him as he served. As his age increased and his energy dwindled, he would rest all week so that he could go out in service every Saturday.

In 1993 George married Stephanie (Cullen) Peterson. They would have been married 24 years in February. As ministers, they worked together to bring comfort and hope to people in the community. They enjoyed time with family, especially playing cards at his sister Louise's home. They took numerous trips to Arizona, spending time with the Slezaks there. Musically, George loved to play his accordion, fiddle, and mandolin. He was good at adding to the noise of family gatherings, which he made a point to never miss.

George was preceded in death by his parents; a brother, Jack Slezak; his first wife, Teresa; daughter-in-law, Mary Slezak; and niece, Lori Renner.
To order memorial trees or send flowers to the family in memory of George Slezak, please visit our flower store.