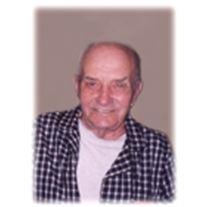 George Hendrickson, long-time resident of Golden Valley, ND, died January 8, 2011, at age 95, at Elm Crest Manor, New Salem.
Funeral services will be held at 2:00 PM on Friday, January 14 at the Elm Crest Manor Chapel, New Salem, with Reverend Ron Hildahl officiating. Visitation will begin one hour prior to the service. Burial will take place in the spring in Halliday, ND. George was born June 13, 1915 in Killdeer to Hans Peter and Ida (Cumber) Hendrickson. He was raised and educated in the Dodge area. On June 22, 1939 George married Anna Klee. The couple and their children lived in Wyoming for a time, before moving back to Underwood where George worked at the Ford garage and on the Garrison Dam Project. They eventually settled in Golden Valley where George opened his own business in 1957. Through the years, he loved hunting and fishing.
George is survived by his daughter, Virginia (Wilbert) Boepple, Salina, CA; three sons, George (Louisa), Ferron, UT, Wesley (Sharon), Mandan, and Charles, Judson; eight grandchildren, Jerry, Jeff, Belinda, Josie, Lance, Clinton, Derrick, and Trina; ten great-grandchildren; and a sister-in-law, Esther Klee of Halliday. George was preceded in death by his parents; wife, Anna; grandson, Michael; four brothers; and a sister.
To order memorial trees or send flowers to the family in memory of George Hendrickson, please visit our flower store.