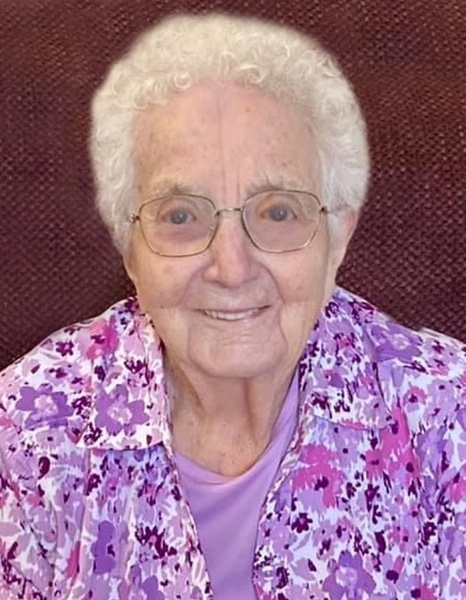 A funeral service will be held at 10:30 am on Friday, August 6, 2021, at Peace Church, New Salem, with Rev. Joshua Eddy officiating.  Burial will be at Peace Cemetery.

Visitation will be held from 5 to 6 pm on Thursday, August 5, 2021, at Peace Church with a Prayer Service at 6 pm.  Visitation will continue one hour prior to the service at the church on Friday.

Genevieve was born April 18, 1921, at the family farmstead of Carl G. and Anna (Smeder) Rask, in Morton County.  She attended country school through the eighth grade.  She met Arthur Weiss at the Big Heart Hall and the two were later married on November 16, 1941.  Genevieve worked side by side on the farm with Arthur until May 1979 when they retired from farming and moved into New Salem.  She then worked as the custodian at Peace Church for over 20 years.

Genevieve loved baking, cooking, and canning the produce from her garden.  She enjoyed crocheting and making afghans and doilies.  Above all, her family was her greatest pride and joy and came before everything else.  Little kids, especially her grandchildren, great grandchildren, and great-great grandchildren brought a smile to her face.  Genevieve was a woman of strong faith, her church was always very important to her.

To order memorial trees or send flowers to the family in memory of Genevieve Weiss, please visit our flower store.
Open