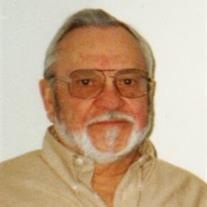 A committal service will be held at 3 pm on Monday, November 3, 2014 at the North Dakota Veterans Cemetery with full military honors.

Gaylord was born February 22, 1922 in Mandan to Warren and Albena (Suchy) Williams. He graduated from Mandan High School and attended Jamestown College. In 1944 he enlisted in the Army Air Force and served as a navigator with the 724th Bomber Sq., 451st Bomber Gr., and 15th AF USA in WWII from 1944-1945. Returning to ND he began working for Vantine Paint and Glass in Bismarck as a glass designer in the construction division. He was particularly proud of his work at BHS and the Gold Seal Building. The company later became Fargo Glass and Paint and Gaylord retired in the late 1980’s.

Gaylord was preceded in death by his parents; in-laws; brother, Henry (Betty) Williams; and sisters, Esther (Carl) Albers, Ruth (Oscar) Nybakken, and infant twins, May and June.
To order memorial trees or send flowers to the family in memory of Gaylord Williams, please visit our flower store.