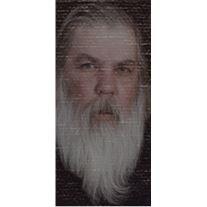 Gary A. Anderson, 58, Center, died at his home of an apparent heart attack on October 20, 2011. Funeral services will be held at 2:00 pm at Center United Methodist Church with Reverend Peder Anderson officiating. Burial will be in the Center Community Cemetery. Visitation will be from 5:30 to 8:00 pm on Sunday at Buehler-Larson Funeral Home, Mandan and continue one hour prior to the service at the church on Monday. Gary was born November 10, 1952 in Bismarck, the son of Charles L. and Gladys Rozina (Oestrich) Anderson. Raised in the Bismarck area, he graduated from Bismarck High School and attended BSC where he obtained an associate degree in history. A creative man of many talents, Gary worked as a historical interpreter for the Lewis and Clark Fort Mandan Foundation in Washburn. On February 15, 1992 he married Sharon Peet Clark in Minot. They made their home in Center. An avid and prolific reader, he also wrote poetry and sketched. Gary was an expert on Lewis and Clark as well as General Custer. A devout Christian, Gary found much fulfillment in religious readings and studying the U. S. Constitution. He particularly enjoyed his involvement with period reenactments for the Fort McKeen Detachment Old Scouts Society.
Gary is survived by his wife, Sharon of Center; sisters, Corrine (Lee) Mitchell of Bismarck and ViAnn (Kevin) Olson of Grand Forks; brother, Duane (Marian) Anderson of Ada, Oklahoma; step son, Kerry Woolley of Minneapolis, Minnesota; step daughter, Amy (Larry) Pederson of Hayden, Colorado; twelve step grandchildren, Ellie, Thomas, Brian, Maria, Nicholas, Matthew, Sabrina, Joseph, Ruth, Adam, Hezekiah, and Naomi Pederson.
Gary was preceded in death by his parents.
To order memorial trees or send flowers to the family in memory of Gary Anderson, please visit our flower store.