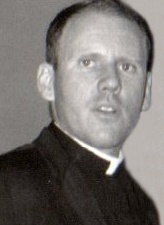 A funeral Mass was held in Detroit, MI followed by the burial of his remains at Holy Sepulchre Cemetery, Southfield, MI.

Fr. McNeely was born on February 13, 1930 in Wyandotte, MI.  On June 7, 1958 he was ordained to the Catholic Priesthood in Detroit, MI.  Fr. “Mac” as he was affectionately known came to St. Joseph’s Catholic Church in Mandan in June 1958, straight out of the seminary.  In 1959 he was transferred to Christ the King Catholic Church, serving with Msgr. Galowitsch.  That summer Fr. Mac organized a church parking lot dance while Msgr. was away on retreat.  Shortly after that he was transferred to Minot, and later Parshall, Mott, and Rhame.  No matter where he went, he was always trying to do something for the kids.  During his ten years in North Dakota he organized and promoted a band called “The Fabulous Seven Dimensions” with Marv Kary on drums and Bill Franke doing vocals/trumpet and an all-girl band called “The Tinkertoys”.

In 1968 Fr. Mac became a chaplain in the US Army, serving 10 years, including a tour in Vietnam with the 173rd Airborne Brigade from 1969-1970.  He was awarded numerous medals including two Bronze Stars.  In 1970 he was assigned as the chaplain at Tripler Army Medical Center in Hawaii.

Fr. Mac lived in Hawaii for over 30 years and was a Priest of the Diocese of Honolulu.  He was the pastor of Holy Family Church and Catholic Academy in Honolulu for 14 years, helping to transform it into a first-rate educational facility booming with students and academic commendations.  Under his leadership, the church expanded its support to adjacent military communities and built a new cafeteria, computer labs, library, an Early Learning Center, and a performing arts program with an outstanding marching band.  In 2001, when Holy Family Catholic Academy’s athletic director, Angela Perez Baraquio, was crowned Miss America, she credited Fr. Mac for her success, commenting his confidence in her made all the difference.  Fr. Mac was the co-founder of the Hawaiian Beach Mass at Ft. DeRussy in Waikiki and began Sunday night “stereo” Masses at the Cathedral for the benefit of young adults and the homeless, always feeding them afterwards.  Fr. Mac’s ministry was always marked with vision and innovation.  He loved the Hawaiian Islands and its people. On May 19, 2001 the Governor of Hawaii and the Mayor of Honolulu together proclaimed it as “Father Mac Day” in Hawaii, noting his many contributions to the people of Hawaii as an outstanding pastor, administrator, and friend.  At age 71, Fr. McNeely retired to a condo on the 12th floor of the Jockey Club on the strip in Las Vegas.  In 2006 he wrote and published the book “Catholicism Without the GUILT.”  In it he said, “The most important thing I can relate to you is this:  God loves us more than we love ourselves.  He judges us by our conscience, not by the churches conscience or our parent’s conscience, but by our own personal conscience.  Simply put, the individual’s conscience is supreme.  This belief has been – and will probably always be – the best kept secret of the Catholic faith.”  When he developed dementia, his sister brought him to Detroit to live in an assisted living facility near her until his death.

Blessed to have shared his life is his sister, Margaret “Peggy” Mara, Farmington Hills, MI; his cousin, Peggi Wirth, Royal Oak, MI; 8 nieces and nephews; many grand nieces and nephews; numerous cousins; and many special friends (Hanai-extended family) that were like his own family.

To order memorial trees or send flowers to the family in memory of Fr. Maurice McNeely, please visit our flower store.