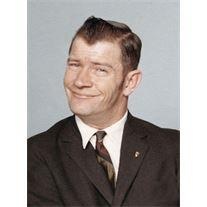 Frederick Kuch Jr., 78, Center, ND, died June 30, 2011 at Hazen Hospital. A Funeral Service will be held at 10:00 am on Wednesday, July 6, 2011 at St. Paul’s Lutheran Church, Center, with Reverend Dennis Ristvedt officiating. Burial will be at St. Paul’s Cemetery. Visitation will be held one hour prior to the service at the church on Wednesday.
Frederick was born July 16, 1932 to Fred and Alma (Schmeling) Kuch in Churchtown, ND. He grew up on the farm and was very active and instrumental in keeping the farm running, working next to his father. Even though he was physically challenged, he could do the work of any man and didn’t let anything stop him, no matter how difficult the task. Frederick wore the same farmer suntan of those in his farming community and was one of the first people to help with harvesting, haying, or working on machinery. He grew up with his favorite horse, Pearl, and his dog, Flicka. He so enjoyed being around the farm animals and helped his father with branding, calving, and vaccinating. He was the all- around farmer and cherished his life on the farm.
After moving to Center with his parents in 1972, Frederick’s pastimes were watching baseball and western movies, of which Bonanza and Gunsmoke were his favorites. Occasionally, one could drive by his house and hear polka music blaring from his stereo.
Frederick’s special needs were tended to by his parents and his sisters, Charlotte and Harriet. Later in life, Frederick was well cared for by a very special guardian angel, his niece, Kim Wilkens. She was assisted by her sister, Susan Hagel, along with Mickie Eidie of Center and Lori Ternes of Zap. No one will forget Frederick’s smiles and happy nature.
Survivors include his sisters, Charlotte (Nelvin) Henke, Hannover and Harriet Meyhoff, Bismarck; nephews, Dwight (Nancy) Henke, Hannover, David (Jeanie) Henke, Hannover, Rick (Leilani) Meyhoff, Hazen, Brent (Deb) Meyhoff, Mandan, Bruce (Robon) Meyhoff, Bismarck, Terry (Deb) Meyhoff, Hazen, and Pat (Judy) Meyhoff, St. Michael, MN; nieces, Paulette Hodgson, Jacksonville, FL, Sandra (Bob) Weisgarber, Hensler, Susan (Gary) Hagel, Bismarck, Kim (Bruce) Wilkens, Center, Tammy Lunneborg, Mandan, Tracy (Kirk) Walker, Thorton, CO; and many great nieces and nephews.
Frederick was preceded in death by his parents, Fred and Alma Kuch; brother-in-law, Ervin Meyhoff; and nephew, Michael Meyhoff.
Memorials are preferred to the Center Ambulance or Hazen Hospice.
To order memorial trees or send flowers to the family in memory of Frederick Kuch, please visit our flower store.