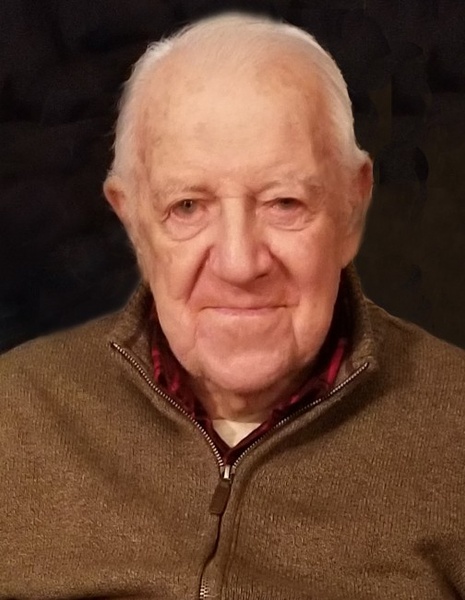 A private Mass of Christian burial will be held on Tuesday, April 7, 2020, at St. Joseph Catholic Church, Mandan, with Fr. Josh Waltz celebrating.  Burial will be at Mandan Union Cemetery.

Frank was born January 3, 1919, on the homesteaded acreage in the Huff hills in his parent’s log cabin, by a midwife.  His parents were Michael Sr. and Victoria (Torszak) Mullner.  He attended school through the eighth grade.  On June 13, 1944, Frank married Betty Muth in St. Anthony.  Frank inherited the farm and continued old traditions of milking cows and raising animals and started new ones like making moonshine to barter and trade.  He was a devout Catholic, never missing a Mass.  If it was storming out and he couldn’t drive to church, he rode his trusty horse, Mable, who would always find his way home in the storm.

In 1969, Frank and Betty moved to Mandan and bought the only house they ever lived in for $8,400.  He sold his cattle to pay cash for this modest home, never to make a mortgage payment.  He worked very hard at farming and construction labor working at Western Ready Mix, Atlas Ready Mix, Kist Livestock, and 15‑years with North Dakota Concrete Products.  Frank retired in 1981.  He was a member of the Catholic Order of Foresters, Bismarck Eagles Club, Mandan Moose Club, and St. Anthony Verien.  He enjoyed the pleasure of playing pinochle and dancing to polka music.

All through the years Frank and Betty would make trips to Colorado to see their children and grandchildren who live there.  They attended every graduation and wedding.  Faith and family meant everything to them.

The family is forever indebted to Elaine and Nicole for their consistent and dedicated commitment to the loving care of Dad.  Their personal sacrifice and loving devotion to Dad’s well-being was over and above what any family member would expect.  Their compassion and patience was admirable.  Thanks to Travis, who was just a phone call away and always available when Grandpa needed help (which was quite often) for advice, for who to call, what should I do, or he would just fix it.

We wish to recognize Dad’s sister-in-law, Dorothy Berreth, who graciously brought nourishing meals and the communion of friendship, along with Dad’s favorite Kuchen.  Rhonda Flegel and Penny Woodward’s tender care, good humor, and friendship gave such joy to Dad, and a feminine presence that touched Dad deeply after the loss of his lovely wife, Betty.

As a result of these five extraordinary women, Dad achieved his lifelong goal to die in his home surrounded by the photos of his large, loving family.  We are forever grateful!

To protect the health and safety of all, services are currently being limited as required by state and local authorities and the CDC. The funeral service will be recorded and shared on the Buehler-Larson Funeral Home website.

To order memorial trees or send flowers to the family in memory of Frank Mullner, please visit our flower store.
Open