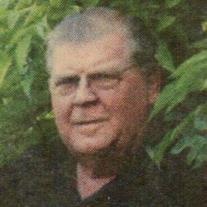 A funeral service will be held at 10:30 am on Friday, February 13, 2015 at First Lutheran Church, Mandan, with Reverend Christina Martin officiating. Private family burial will be held at the ND Veterans Cemetery with full military honors.

Visitation will be held from 4 to 8 pm on Thursday, February 12, 2015 at Buehler-Larson Funeral Home, Mandan, and continue one hour prior to the service at the church on Friday.

Frank was born February 16, 1937 in Chicago, Illinois to Eric and Eleanor (Beba) Bondeson. At the age of 6 his family moved to a farm south of Mandan where Frank attended Little Heart School. He enlisted in the US Air Force at age 17 and served overseas for 4 years at Bitburg Air Force Base in Germany. Following his discharge in 1957, he returned to Mandan. On September 16, 1959 he married Carlene Shimek at First Lutheran Church in Mandan. Frank worked as a dental assistant at Mandan Dental Lab for several years and for Montana Dakota Utilities as a serviceman for 36 years. Frank was a hero in 1965 when he saved three children from a house fire while he was working for MDU. He enjoyed camping his entire life. Frank was a member of the Dakota Sunrise Chapter of Good Sam where he made many wonderful friends and was also the assistant director of the Good Sam Club for several years. Frank enjoyed spending time at his son’s cabin on Lake Tschida. He looked forward to 10:30 Sunday morning breakfast at his home with his children and grandchildren. Frank is remembered for being a good listener.

Frank was preceded in death by his parents and one brother, Allen.

We would like to thank with all our hearts our family and friends who have been at our sides whenever we need them. A special thank you to our wonderful neighbor, Richard Nies, who literally came to help at the drop of a hat.
To order memorial trees or send flowers to the family in memory of Frank Bondeson, please visit our flower store.