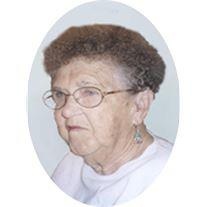 Frances Schulz, 84, New Salem, died November 8, 2012 at Elm Crest Manor, New Salem.
A funeral service will be held at 11:00 am on Tuesday, November 13, 2012 at Peace Church, New Salem, with Reverend Joshua Eddy officiating. Cremation has taken place and a private family burial will be held.
Visitation will be held from 1-2 pm on Monday, November 12, 2012 at Elm Crest Manor, New Salem. Visitation will continue from 9 am to 11 am on Tuesday at the church, prior to the service.
Frances was born at the Gaebe farm on December 27, 1927 to John and Frances (Zarndt) Gaebe. She was born ten years after her siblings, Walter, Teddy, and Hilda. Raised and educated in New Salem, Frances was baptized and confirmed at Peace Church and graduated from New Salem High School. She attended Dickinson State College and taught at Sweetbriar School for one year. On November 15, 1948 Frances married Kenneth Schulz. Frances worked at Gaebe Pharmacy for two years and quit to care for her ailing father. She later was employed at Elm Crest Manor for some time, the New Salem Co-op Store, and at the Lunch Box Café at Golden West.
Generous and giving of her time, Frances was an active 4-H leader, member of the Women’s Guild, a Sunday school teacher, choir member, Morton County Fair board member, Rodeo Association, West River Teamsters, and a founding member of the Saddle Club. Frances’ favorite retirement pastime was going on wagon trains, cooking, and enjoying her time with Kenny and their family. She also enjoyed bird watching and reading. Above all she was a wonderful and loving wife, mother, grandmother, and great grandmother. Her love and kindness will be forever remembered by all who knew and loved her.
Blessed to have shared her life is her husband of nearly 64 years, Kenny Schulz; their six children, Sandy Schulz, Bonnie Woods, Jackie (Frank) Bickford, Wade (Linda) Schulz, Roberta (Arnold) Voigt, and Barry (Michelle) Schulz; 16 grandchildren; 20 great grandchildren; brother-in-law, Marvin (LaVerne) Schulz; and sister-in-law, Shirley Schulz.
Frances was preceded in death by her parents; sister, Hilda (Herman) Maier; brothers, Walter (Mildred) and Ted (Edith) Gaebe; son-in-law, Bill Woods; and brothers-in-law, Willard Schultz and Glen Schulz.
In lieu of flowers, Frances wanted donations made to the Peace Church Sanctuary and Bell Choirs.
To order memorial trees or send flowers to the family in memory of Frances Schulz, please visit our flower store.