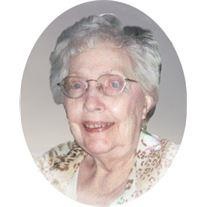 Fern Bueligen, 89, Mandan, died August 16, 2012 at the Baptist Home, Bismarck.
Funeral services will be held at 1:00 pm on Monday, August 20, 2012 at Evangel Assembly of God, Bismarck, with Reverend Doug Graham and Reverend Clyde Zimbelman officiating. Burial will be at St. John’s Cemetery, south of Mandan.
Visitation will be held from 4-8 pm on Sunday, August 19, 2012 at Buehler-Larson Funeral Home, Mandan, with a prayer service at 7 pm. Visitation continues one hour prior to service at the church on Monday.
Fern was born January 6, 1923 in Bismarck to Fred and Laura (Schulz) Hagerott. On April 15, 1958 she married Richard Bueligen at St. Paul Lutheran Church in Center, ND, where they made their home and raised three children and one step-daughter. Being a wonderful wife and mother, dedicated to her family, Fern still found time to work as a cook at Cross Ranch and teach Sunday school at St. Paul’s Lutheran Church in Center. Along with this she enjoyed gardening, sewing, and canning.
In 1980 Fern and Richard moved to Mandan and she worked as a hostess at Kirkwood Inn, Bismarck. In 1981, Fern accomplished the long time goal of receiving her High School GED. Through the years before retirement, Fern served on the Missouri Slope Nursing Home advisory board, was a member of RSVP, chaired the funeral committee at the First Lutheran Church, Mandan, and was in quilting groups. After retirement to keep herself busy, she did volunteer work in several areas and spent a large amount of time with her grandchildren.
Blessed to have shared her life is her daughter, Rodella (Barry) Hausauer, Mundelien, IL; stepdaughter, LaDonna Bueligen of San Carlos, CA; sons Delvin (Becki) Bueligen, Mandan and Lowell (Tammy) Bueligen, Otsego, MN; seven grandchildren, Justin Bueligen, Chantel (Christopher) Schaf, Naomi (Dominic) Marks, Ryan (Katie) Hausauer, Brandon Hausauer, Evan Bueligen, and Ashley Bueligen; four great-grandchildren, Ana and Max Schaf, Elliot Bueligen, and Lily Hausauer; one sister, Arline Orgaard, Bismarck; and two brothers, Delmar Hagerott, Center and Norlan (Dollie) Hagerott of Ortonville, MN.
Fern was preceded in death by her parents; her husband, Richard in 1991; brother, LeRoy Hagerott; brothers-in-law, Lynn Orgaard and Edwin Lindner; and one granddaughter, Rachel Bueligen.
To order memorial trees or send flowers to the family in memory of Fern Bueligen, please visit our flower store.