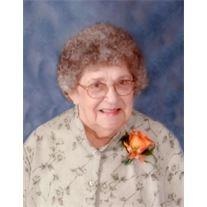 Eva Emil, 86, Mandan, died April 27, 2011 at Medcenter One Hospital, Bismarck.
Mass of Christian burial will be held at 9:30 am on Saturday, April 30 at St. Joseph Catholic Church, Mandan, with Reverend Patrick Schumacher celebrating. Burial will be at Mandan Union Cemetery.
Visitation will be from 3-8 pm on Friday, April 29 at Buehler-Larson Funeral Home, Mandan, with a Parish Rosary / Vigil at 7 pm. No visitation will be held at the church.
Eva was born May 24, 1924 in Glen Ullin to Jacob and Clementine (Berger) Ferderer. She attended school through the eighth grade. On May 6, 1946 she married George Emil in Mandan. They were married 18 years and had four children. George died January 29, 1965. Compassionate and strong, Eva raised their four young children. She was a housekeeper and also worked at the Lewis & Clark as a waitress and cook until her retirement at age 62. Loved and cherished by all who knew her, she will be deeply missed.
Left with fond memories is a daughter, Glenda Emil, Mandan; two sons, Wayne (Anita) Emil, Bismarck and Tim (Jolene) Emil, Mandan; six grandchildren, Wayne Jr. (Kim), Robert, and David Emil, DeAnn Emil, Shawna (Chris) Poitra, and Kristi (Beck) Hruby; 4 great grandchildren, Chalsie, Zach, and Micaela Emil, and Cade Hruby; and two brothers, Clem (Lucille) Ferderer, Leavenworth, WA and George Ferderer, Tacoma, WA. Eva was preceded in death by her husband; daughter, Debra in 2006; great grandson, Caleb Emil; two sisters, Josephine Bryce and Kathryn Still; and two brothers, Alex and Henry Ferderer.
To order memorial trees or send flowers to the family in memory of Eva Emil, please visit our flower store.