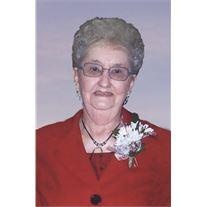 Ethel Rychlik, 86, Mandan, died September 14, 2013.
A funeral service will be held at 11:00 am on Wednesday, September 18, 2013 at First Lutheran Church, Mandan, with Reverend Jack Carlson officiating. Burial will be at Mandan Union Cemetery.
Visitation will be held from 4-7 pm on Tuesday, September 17, 2013 at First Lutheran Church with a prayer service at 6:30 pm. Visitation will continue one hour prior to the service at the church on Wednesday.
Ethel was born January 23, 1927 to Henry and Eva (Chyles) Bruggeman southwest of Mandan. She was raised on a farm and educated in rural Morton County along with three brothers. After moving off of the farm in 1944 Ethel worked for Hoskin Meyer Photo. On June 27, 1951 she married Charles Rychlik, son of Charles and Katherine (Jares) Rychlik. In the late 1960’s she worked at Roosevelt School in Mandan and later at United Printing. After her daughter Lori’s passing Ethel helped raise two grandsons for many years. She enjoyed cooking, baking, and entertaining family during holidays in her home. Ethel was known for her famous potato salad, mashed potatoes, and rhubarb custard pies. She loved spending time with grandchildren and her family, visiting, and going to Prairie Knights Casino where she was usually a winner.
Ethel is survived by two sons, Jerry (Karen) and Donald (Marlys); son-in-law, John (Mary) Kluzak, all of Mandan; 7 grandchildren, Tessa (Cory) Monzelowsky, Trista Rychlik, Lisa (Jim) Anderson, Nicole (Kirk) Jenson, Nathaniel (Shelly) Rychlik, and Christopher and Matthew Kluzak; 7 great-grandchildren; one brother, Walter (Jane) Bruggeman; sister-in-law, Arlene (Ron) Capelle; and her nieces, nephews, and cousins.
Ethel was preceded in death by her parents; her husband, Charles, in 1992; one daughter, Lori, in 1999; brother, Henry; and an infant brother, Raymond.
To order memorial trees or send flowers to the family in memory of Ethel Rychlik, please visit our flower store.