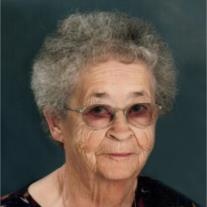 A funeral service will be held at 10:00 am on Tuesday, June 28, 2016, at St. Paul Lutheran church in Bismarck, with Reverend Michael Roehl officiating. Committal service will be at Graceland Cemetery in New Salem.

Visitation will be held from 5:00 to 8:00 pm on Monday, June 27, 2016, at Buehler-Larson Funeral Home, Mandan. Visitation will continue one hour prior to the service at the church.

Ethel Baumgarten was born on the farm near New Salem on February 4, 1926, the daughter of August Emil Rasch and Ethel Minnie (Camp) Rasch. She was baptized at Peace Church in New Salem and confirmed in the Bremmen Lutheran Church. She received her education at the country school and she graduated from New Salem High School in 1942 at the age of 16. After graduating, she moved to Minneapolis and worked in an ammunition plant for the war effort. After the war, she moved to Dickinson, ND, to further her education and become a teacher, teaching in Morton County rural schools.

Ethel married Robert Baumgarten on July 26, 1950, and helped him with his business, B & B Garage and farming. Ethel enjoyed reading, gardening, and loved cats. Her family always enjoyed her cooking.

Ethel is survived by her son, Joel Baumgarten of New Salem, and daughter, Jan (Danny) Joppru of MN; one grandson, Alex (Alyssa) Joppru of Mandan, and one great-grandson, Asher Joppru.

Ethel was preceded in death by her husband, Robert; her parents; sister, Amy; three brothers, James, Francis, and Aaron; and three brothers-in-law, Harold, Vernon, and Ervin.
To order memorial trees or send flowers to the family in memory of Ethel Baumgarten, please visit our flower store.