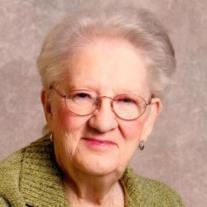 A funeral service will be held at 10 am on Monday, June 15, 2015 at First Lutheran Church, Mandan, with Reverend Lee Herberg officiating. Burial will be at St. John’s Cemetery, rural Mandan.

Visitation will be held from 3 to 8 pm on Sunday, June 14, 2015 at Buehler-Larson Funeral Home, Mandan, with a prayer service at 7 pm. Visitation will continue one hour prior to the service at the church on Monday.

Esther was born June 15, 1926 in Raleigh, ND to Demetry and Thecla (Visotenko) Loshesky. She grew up on a farm in the St. Gertrude’s area where she attended school. Esther met Arthur R. Fisher and they were married on March 1, 1946. They lived in the Fallon area and later moved to a farmstead they called home and raised their seven children. Esther and Art farmed and raised cattle along with poultry, pigs, and a large garden. She worked hard alongside her husband until the children were big enough to help with chores and then she would tend to other things with the younger children. Sundays were very special. After a homemade meal Esther and Art would go out to the pasture to play ball with the children. The older kids would play in the outfield and Art would help the younger ones to bat while Esther would hold their hands to run the bases. A wonderful cook and baker, Esther made every meal from scratch. They raised and butchered their meat and she canned the vegetables from her garden to feed her family all year long. Often singing while she was in the kitchen, Esther baked bread, buns, and pies to share with company who often stopped by. She’d also make large pots of vegetable soup or chicken soup with homemade noodles to feed her family and neighbors. No one ever left her home hungry. On holidays Esther loved making a bag of popcorn balls for each family, and also rosettes and date filled sugar kuka. After butchering chickens she’d make fried chicken with mashed potatoes, cream gravy, and a big pot of homemade chicken soup. At thrashing time she’d prepare huge meals to feed the workers. Esther loved flowers, especially morning glories, tiger lilies, and roses. When the plum trees and lilac bushes blossomed she would open the windows to enjoy the fragrance flowing through the house. Kind and loving with a heart of gold, Esther taught her family to treat others fairly, show kindness and respect, and “If you can’t say anything nice, don’t say anything at all.” A beloved mother, grandmother, and great grandmother, Esther will be missed by all those who knew and loved her and her memory will live in their hearts forever.

Thank you to Prairieview Nursing Home in Underwood and Sanford Care Center on Sunset in Mandan for their loving care of Esther and to Evelyn Kraft for her lifelong friendship with Esther
To order memorial trees or send flowers to the family in memory of Esther Fisher, please visit our flower store.