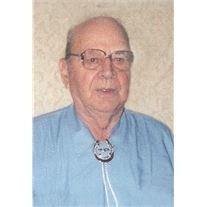 Erwin H. Holle, 96, New Salem, died January 13, 2013 at Elm Crest Manor, New Salem.
A funeral service will be held at 11:00 am on Saturday, January 19, 2013 at Peace Church, New Salem, with Reverend Joshua Eddy officiating. Burial will be at Peace Cemetery.
Visitation will be held from 1 to 2 pm on Friday, January 18, 2013 at Elm Crest Manor and continue from 3 to 8 pm at the Buehler-Larson Funeral Chapel, New Salem, and one hour prior to the service at the church on Saturday.
Erwin was born December 4, 1916 in New Salem to Charles and Freida (Geissler) Holle. He was raised and educated in New Salem. In 1942 Erwin enlisted in the US Navy and took submarine training at Pearl Harbor. During WWII he was in submarine service, making a war patrol on USS Pogy, and later enjoyed working in the optical shop in Alaska. Discharged in 1946, Erwin returned home to New Salem and on September 3, 1948 he married Leah Isley in Oakes. The made their home eight miles north west of New Salem where Erwin farmed until his retirement in 1982. He was later a director for the New Salem Historical Society for many years. He enjoyed building model engines and always marveled at the miracles of nature. Erwin loved to sing and play harmonica all of his life. He entered Elm Crest Manor in 2006 and enjoyed all of the friends he had there, and especially being a part of the Lounge Lizards who played music at Elm Crest every Friday. Erwin was a lifetime member of the American Legion and a member of the Silent Service. He served 6 years on the Peace Church council and was a choir member.
Blessed to have shared his life are two daughters, LaRae (Terry) McGillivray, Moorhead, MN and Julia (Chad) Hanson, Detroit Lakes, MN; one son, Mark Holle, Fargo; seven grandchildren, Shauna and Kevin McGillivray, Ben, Sam, and Meg Holle, and Kelli and CJ Hanson; one great grandchild, Antigone Holle; a brother, Robert (Mardell) Holle, New Salem; and a sister, Elda Weiss, New Salem.
Erwin was preceded in death by his wife, Leah, in May 1996; son, Jeff Holle in December 2007; his parents; sister, Amanda (Emil) Myers; and brother-in-law, Herman Weiss.
In lieu of flowers the family prefers memorials to the Anne Carlson Center, 701 3rd St NW, Jamestown, ND 58402.
To order memorial trees or send flowers to the family in memory of Erwin Holle, please visit our flower store.