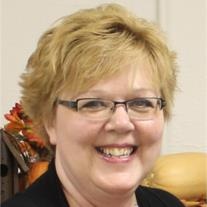 A funeral service will be held 11 am on Wednesday, August 10, 2016 at First Lutheran Church, Mandan, with Pastor Christina Martin officiating. Inurnment will follow at Mandan Union Cemetery. There will be no visitation at the church on Wednesday.

Visitation will be held from 5 to 8 pm on Monday, August 8, 2016 at Buehler-Larson Funeral Home, Mandan. Per Eloise’s request, cremation will take place following Monday’s visitation.

Eloise Ann (Nelson) was born August 25, 1957 in Bismarck to Roy G. and Mabel (Clark) Nelson. She was raised on a farm south of Mandan and attended country grade school. She graduated from Mandan High School in 1975. In 1977 she began dating James Bernhardt after meeting at a wedding dance. As many coincidences and run in’s would prove, these two were fated to be together. They were married on September 19, 1981 in Mandan where they made their home. Jim and Eloise shared a love for travel and enjoyed their trip through the national parks of the US. A compassionated person and caretaker on every level, Eloise became a Licensed Practical Nurse while raising two young children. She loved her work at Custer Family Planning, HIT/Dakota Alpha, and other local care centers. She was proud to have helped re-establish the clinic for the Ruth Meyers House. Eloise and Jim were blessed with two children, Miranda and Ben. They say they were given the “ideal childhood” from an attentive mother who gave them freedom to run and play, never judged or criticized them for being human, loved hard and laughed often, and who was known as the “Cool Mom” by all their friends. They loved to camp and travel as a family, visiting the Atlantic and Pacific oceans, Maui, and Orlando. Family traditions were important to Eloise and she blessed her family with many. She taught her children how to cook, to love music and art, and to care for animals. She poured her heart and soul into everything she did. Eloise showed great excitement and love for her grandson, Jacob, and wanted to teach him to play the piano. Eloise will be remembered as one of the strongest women, with one of the softest hearts. She loved life, her family, her cats, rollercoasters, and a strong cup of coffee. She had a huge and giving heart that just gave out in the end.

Eloise was preceded in death by her parents, Roy and Mabel Nelson; her father-in-law and mother-in-law, Jack and Martha Bernhardt; and a sister-in-law, Dorothy Nelson.

In lieu of flowers, memorials may be directed to the Central Dakota Humane Society, 2104 37th St., Mandan, ND 58554 in memory of Eloise and her special love for her pets, Phoebe and Joey.
To order memorial trees or send flowers to the family in memory of Eloise Bernhardt, please visit our flower store.