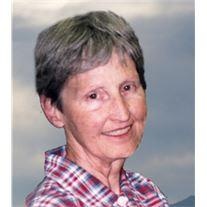 Ellen Ardell Leinius, 70, Center, died April 5, 2013 at Missouri Slope Lutheran Care Center, Bismarck from complications of diabetes.
A funeral service will be held at 11:00 am on Thursday, April 11, 2013 at Buehler-Larson Funeral Home, Mandan, with Dwight Duke officiating. Burial will be at the Center Community Cemetery.
Visitation will be held from 4 to 7 pm on Wednesday, April 10, 2013 at Buehler-Larson Funeral Home, Mandan, and continue one hour prior to the service at the funeral home on Thursday.
Ellen was born February 24, 1943 in Bismarck to Ralph and Ruby (Tye) Bigelow. Raised on the family farm, she attended country school until the third grade when her family moved to Center. She enjoyed being a 4-H member. Ellen graduated as Valedictorian in 1961 and went on to attend NDSU where she played the clarinet in the marching band, won the Little International Bread Baking contest, was a life member of Kappa Kappa Gamma Sorority, and graduated in 1965 with a major in clothing and textiles. Ellen taught in Steele, ND for two years and then moved back to Center where she started the Home Economics program at Center High School. Very talented and creative, she was an excellent seamstress, quilter, cake decorator, yard landscape artist, and gardener. In 1980 Ellen became an XI Charter Member of Delta Kappa Gamma, a Woman’s Education Honorary Society. In 1981 she embarked on a new career with her Dad at the Oliver County Abstract Office and became the owner when her Dad retired. She ran the abstract office until her retirement in 2009. A caring and giving woman, Ellen became guardian of her nephew, Ted Bigelow in 1991 and was a Girl Scout Camp Assistant Director in New York for four summers. Family was important to her and she enjoyed many family reunions in the Black Hills.
Blessed to have shared her life is one brother, Kurt (Nancy) Bigelow, Sturgis, SD; her “almost sister”, Barb Fleming, Center; numerous nieces and nephews; and her beloved dog, Dottie.
Ellen was preceded in death by her parents; sister, Marcia; brother, Buell; and nephew, Ted Bigelow.
In lieu of flowers, the family prefers memorials to the Oliver County Ambulance Service.
To order memorial trees or send flowers to the family in memory of Ellen Leinius, please visit our flower store.