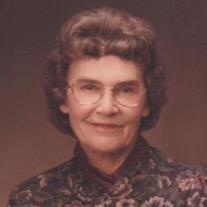 Elda was born June 13, 1919 to Charles and Freida Holle and grew up north of New Salem on the beloved family farm. Elda graduated from New Salem High School and, being an adventurous young lady, later moved to the states of Oregon, California and Minnesota. She returned to North Dakota whenever needed to care for her mother. Elda was a very devoted daughter who cared for her mother and later her father for many years.

In 1947, Elda married Herman F. Weiss and they made their home in New Salem where they were blessed with four children, David, Mary, Daniel and Corrinne. After the children were grown, Elda rejoined the work force, first as one of Elm Crest Manor’s original employees and later with Morton County Social Services.

Elda and Herman loved to travel and they took many trips always including their young children. Never one to sit still, Elda enjoyed sewing, baking, going for walks, and especially loved working in her flower and vegetable gardens, with her sprinkling can always in hand looking for any plant in need of water. She truly loved the prairie and found great joy in God’s good earth.

Elda was a wonderful and caring wife, mother and grandmother. She dearly loved her family and never failed to let them know it. They will miss her more than words can say.

Elda was preceded in death by her husband, Herman; her parents; a brother, Erwin; a sister, Amanda Myers; and a son-in-law, Jim Reiner.
To order memorial trees or send flowers to the family in memory of Elda Weiss, please visit our flower store.