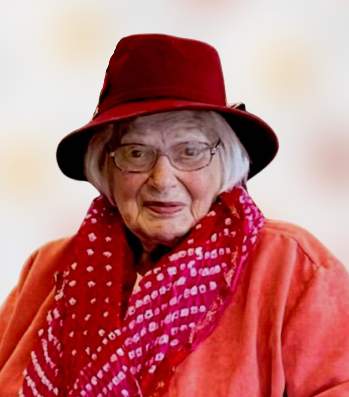 Edith Otto passed away Sunday, August 21, 2022 at Edgewood Care Center in Mandan. Funeral service will be held on Friday, August 26, 2022 at 10:30 AM at First Lutheran Church in Mandan with Rev. Phil Leer presiding. Burial will follow at the North Dakota Veteran’s Cemetery. Visitation will be on Thursday, August 25 from 5-7 PM at Buehler Larson Funeral Home in Mandan and will continue one hour prior to the funeral on Friday.

Edith was raised and educated in Robinson, ND, and went on to get her GED later in life. She married Roy Otto on October 11, 1947, in Steele, ND. Together they moved to Mandan in 1950. Roy was a self-employed lath and plaster contractor where Edith worked as his bookkeeper. In 1972, they returned to the farm near Robinson where they also operated the Robinson Grocery Store for nine years. After selling the grocery store, they spent their summers at their cabin near Pick City. They returned to Mandan in the fall of 1997.

Roy and Edith spent many summers camping and fishing at Heart Butte Dam and Lake Sakakawea. Many fish fries and pig roasts were enjoyed by family and friends with live music playing on their deck for all to enjoy. Edith enjoyed the times when the grandkids came for a visit, at the lake or farm. She would spend hours practicing Nintendo so she could play with the grandkids. She loved to knit and made blankets for each family. She was also a great cook. The kitchen was her domain and card playing was her game. Everyone waited for her chicken and dumplings and there was dessert every day with German chocolate cake and homemade frosting (her specialty). She was a member of the American Legion Women's Auxillary.

Edith loved to play Bridge, Pinochle, or any card game with her family and friends. After Roy passed away in 1999, Edith became as active as a person she could be, whether it was working out at Curves or doing water aerobics. Edith’s philosophy was: You need to keep moving before you lose what you have. She would spend hours on the phone visiting with family and friends trying to keep in touch with everyone.

After fracturing her pelvis and couldn’t drive anymore, she moved to Edgewood, Mandan, in 2014. Edith participated in all the activities that Edgewood offered. Exercise class, bingo, and card playing. She truly loved the music that was offered for special events. She loved doing puzzles, word finds, and playing solitaire to keep her mind busy when she wasn’t playing Pinochle with her friends.

Edith will be deeply missed by all her family; special friends, Mert Graner and Marlene Schwab; cousin, Goldene Knutson; and special nieces and nephews. We want to especially thank the Edgewood Memory Care Staff and all of you that reached out to mom by calling, visiting, sending cards, and for all the prayers that were prayed on her behalf. At the end of her life, with her advancing dementia affecting her mind, we are thankful for the times we did get to spend with her and knowing that she is in a better place and won’t have to be afraid anymore. Hallelujah!!

To order memorial trees or send flowers to the family in memory of Edith Otto, please visit our flower store.