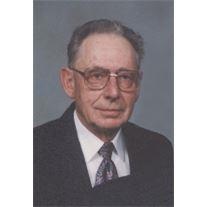 Edgar Schwagler, age 91, of New Salem, died March 14, 2012 at the Medcenter One Hospital in Bismarck. Funeral services will be held at 10:30 AM Saturday, March 17, 2012 at the Zion Lutheran Church in New Salem with the Reverend Russell Fitch officiating. Burial will be in Graceland Cemetery, New Salem. Visitation will be from 1:00 to 2:00 PM Friday at the Elm Crest Manor in New Salem and will continue from 3:00 to 8:00 PM at the Buehler-Larson Funeral Chapel in New Salem, where a prayer service will begin at 7:00 PM.
Edgar Andrew was born on May 7, 1920 at Otter Creek, the son of Leopold and Christina (Huber) Schwagler. He graduated from New Salem High School in 1941. He farmed until 1947 and was then employed at the Gambles Store in New Salem. Edgar was united in marriage to Evelyn Esther Sorge on June 20, 1948.
In 1974, Edgar purchased the Gambles store along with his partner, Lloyd Just, from E. C. Christiansen. When he sold the store in 1990, he had been affiliated with Gambles just short of 43 years. He then began his employment with Buehler-Larson Funeral Home, serving the firm for 14 years in the New Salem Chapel and in the surrounding communities of Almont, Hannover, and Center until 2005 when he retired.
A life-long Lutheran, first in Otter Creek and then in New Salem, he served on many committees, held elected offices, and taught Junior Bible Class. He was active in his community as well. Edgar was a charter member of the New Salem Ambulance Service, a City Alderman, a member of the Central Morton Sportsmen’s Club, a volunteer fireman, Boy Scout leader, and a board and life member of the New Salem Historical Society. His service involved many volunteer hours.
An active sportsman, he hunted for 75 plus years and was an avid fisherman. He also cleaned and did small repairs on firearms for many hunters in the area until his eyesight failed.
He is survived by his wife of 63 years, Evelyn; his daughter, Angela Bland of Atlanta, Georgia; his son, Tim (Shereen) Schwagler of Mandan; his grandchildren, Kori and Derek Kaelberer of Atlanta and Colter and Ryder Schwagler of Mandan; his brothers, Robert (Ardella) and Lester (Linda), all of New Salem; and several nieces and nephews.
Edgar was preceded in death by his parents and his sister and brother-in-law, Della and Arnold Flegel.
In lieu of flowers, memorials are preferred to the Dakota Boys Ranch, the Alzheimer’s
Association, or a charity of donor's choice.
To order memorial trees or send flowers to the family in memory of Edgar Schwagler, please visit our flower store.