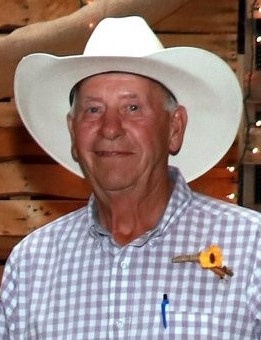 A Mass of Christian Burial will be held at 10:30 AM on Thursday, May 12, 2022, at St. Pius Catholic Church, New Salem, ND with Rev. Bruce Krebs presiding. Burial will be at Graceland Cemetery.

Visitation will be held Wednesday, May 11, 2022, from 5:00-7:00 PM at St. Pius Catholic Church, New Salem, with a Rosary/Parish Vigil at 7:00 PM. Visitation will continue at the church one hour prior to the service on Thursday.

Douglas Henry was born on April 28, 1947, to Nick and Elda (Beusen) in New Salem, ND, where he lived until 1958. Doug then moved to the farm his parents purchased southeast of Judson and resided there until his death.

Douglas met Martha Margison when her work as a travelling magazine salesperson took her to North Dakota. They were married on Dec. 28, 1967, at St. Pius V Catholic Church in New Salem. They made their home on the family farm between Mandan and New Salem. Doug was a very hardworking and diligent farmer. He and Marty farmed and ranched together until her death in 2013. They also ran a dairy until 1996. Doug had several truck driving jobs throughout the years.

Doug and Marty enjoyed several fun family trips and together they went to Hawaii and the Virgin Islands. Doug loved the land and enjoyed hunting as much as he did farming and ranching. He also enjoyed spending time with family and friends and hosted many Fourth of July gatherings.

In lieu of flowers, memorials may be made to Sweet Briar School.

To order memorial trees or send flowers to the family in memory of Douglas Kautzman, please visit our flower store.