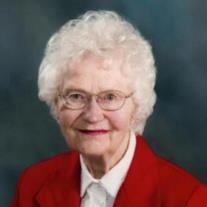 A funeral service will be held at 11 am on Monday, March 16, 2015 at Center United Methodist Church with Reverend Cory Thrall officiating. Burial will be at the Center Community Cemetery. The family will greet friends one hour prior to the service at the church on Monday.

Dorothy was born to Frank and Reidun (Loraas) Reckard on the family farm near Dunn Center on September 3, 1917. Raised on the farm, she attended Connolly School No. 1 through the eighth grade and graduated from Dunn Center High School in 1935. Following graduation she helped her parents and brother on the family farm until 1944 when she obtained a teaching permit and taught the home school for two years. She attended Dickinson State College and received her Standard Teaching Certificate in 1948. Dorothy then taught for one year at the Oakdale School and then moved to Center where she taught grades 5 and 6 at Lincoln Public School. In 1949 she met Oliver Light and they were married on November 17, 1951 at Normanna Lutheran Church in Dunn Center. They resided on his farm near Center. Dorothy continued teaching and helped Oliver on the family dairy farm. Taking college courses during the summers, Dorothy received her Bachelor’s Degree in Elementary Teaching and Social Studies in 1975 from DSU. She retired in 1980 after 35 years of teaching. Following their retirement Dorothy and Oliver traveled around the United States visiting relatives and seeing historical places. Oliver passed away in 1988. Dorothy continued living on the farm where she enjoyed gardening and taking care of her flowers and the yard.

Blessed to have shared her life is one sister, Hazel Christensen, Dunn Center; one brother, Ben (Pam) Reckard, Dunn Center; and numerous nieces and nephews.

Dorothy was preceded in death by her parents; her husband; sister, Irene (Werner) Sather; and brother-in-law, Curtiss Christensen.
To order memorial trees or send flowers to the family in memory of Dorothy Light, please visit our flower store.