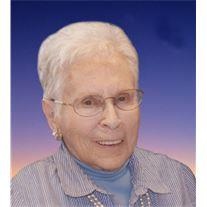 Dorothy Bethke, 94, New Salem, died April 28, 2011 at Elm Crest Manor, New Salem.
A Funeral Service will be held at 1:00 pm on Monday, May 2, 2011 at Salem United Church of Christ with Reverend Ron Hildahl officiating. Burial will be at Bethel Cemetery.
Visitation will be from 1-2 pm on Sunday, May 1 at Elm Crest Manor and from 3-8 pm at Buehler-Larson Funeral Chapel in New Salem. Visitation will continue one hour prior to the service at the church on Monday.
Dorothy was born June 25, 1916 in Blue Grass to Herman and Martha (Thiel) Schwartz. On May 18, 1934 she married Art Bethke at her family home south of New Salem. She and Art were in the coal mining business and later farmed 15 miles south of New Salem. Dorothy loved being a farm wife. She enjoyed the pleasures of gardening and filling her fruit room with canned meat, vegetables, fruits, and jelly. A talented cook, she liked cooking for her family and friends, no one ever left without being well fed. She loved the outdoors, especially fishing and in her younger days she liked to go deer hunting. A great shot, she seldom ever missed her target. Dorothy was a talented artist who painted beautiful pictures. Dorothy was a lifetime member of Bethel United Church of Christ.
Dorothy will be deeply missed by her daughters, Sharan and Sherry Bethke; son, Terry Bethke; daughter-in-law, Marlene Bethke, all of New Salem; grandson, Kelley (Kimberly) Bethke, New Salem; great grandchildren, Karl Bethke, Lincoln and Kooper, and Kiera Bethke, New Salem; brother-in-law, Archie (Audrey) Bethke, New Salem; special friends, Jeff, Sheryl, and Jory Violett, Renelle Branson and her dog, Lexi; and many nieces and nephews.
Dorothy was preceded in death by her parents; husband of nearly 60 years, Art; son, Roger; granddaughter, Kim Bitterman; brothers, Clarence, Lester, and Harvey; and a sister, Rose.
To order memorial trees or send flowers to the family in memory of Dorothy Bethke, please visit our flower store.